For the first time in many years, this winter I've had a mouse problem in my tack box.

I think that they're getting in at the bottom where the doors don't line up properly as the ground it sits on is uneven. They only need a space the size of a dime to be able to sneak in.

On two of my last five visits, a mouse has greeted me when I opened the door. So that makes it obvious. Not to mention the raisins they've left behind and the distinct aroma of eau de mouse.

Whenever I've been out for the last month I've been in a bit of a rush so I haven't taken out anything other than grooming kits. Last night I had a few extra minutes so I ventured over to the saddle side of the box.

And discovered that a mouse had chewed into the lining of my Equestrian Stockholm saddle pad. 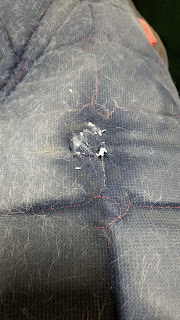 That's a declaration of war.

They couldn't have chosen the $10 pad that was with it. Nope, had to go for the good stuff.

I think that Miss Mouse was trying to set up her nest in there as there was what seemed to be a Kleenex all chewed up into bedding in the saddle pad. Hopefully I disrupted it at the right time.

I went home and immediately ordered bait stations. Nothing is fair in love and war.

(I'm pretty sure the saddle pad will survive to be usable - the hole is fairly small and on the underside. I just have to decide how I want to patch it.)
at December 21, 2019