The ponies have been looking a little feral lately with their 5 weeks of little attention. They are super fluffy and have hair sprouting from everywhere.

Well, not quite everywhere. Cisco is missing a big chunk from his mane. 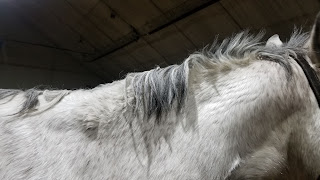 He is not having a good hair year. I buzzed off too much of his forelock last spring when I had to blindly put the clippers up above my head to clip his bridlepath. He is now much better about the clippers by his ears, so the forelock has been slowly growing back. He had a bit of a mohawk through the summer.

Then the top part of his mane disappeared this summer. It was either his fly sheet hood, or from sticking his head through the fence to eat the greener grass. That's now growing back, but it's growing straight up.

Lately, the bottom part of his mane got rubbed out by his winter hood. It's the same hood he's worn the last couple of years without issue, but it underwent some repairs between seasons and I think that the stitching is what pulled out his mane. He's now wearing a different hood so hopefully there will be mane there by spring.

The plan is to start riding again on Monday as work starts to quiet down. High on the priority list will be to get the kids clipped. I had a couple of hours free on Tuesday morning so I decided to get a head start on their makeovers.

Phantom was easy - I just shaved her goat chin and gave her cheekbones once again. She needs her mane done but I'll do that another day.

Cisco also got his face sculpted, and then a bridle path. Then I tackled his mane.

He doesn't grow a lot of hair so his mane is very fine and not very thick. I don't really pull it, I usually just use a combination of a thinning rake and scissors.

I grabbed my scissors. Which apparently were My First Scissors by Crayola. They sucked. Oh well, his mane couldn't have looked much worse than it was before.

Now it's kinda the same length. Except for the part that isn't there - can't really do anything about that. If only it all laid down instead of going in different directions!