It's Never Just a Saddle

I'm getting a Pixio.
I got a smallish bonus at work that would pay for about half a Pixio. I added a little bit to the account from sales at the tack show a few weeks ago. I already have a tripod, video camera and bag I can use. So the plan was to wait through the season and see if a sale pops up between now and Christmas. I won't really be riding for the next couple of months, so I can wait if I have to pay regular price.

And then Pony Grandma gave me some news.

She received the last bit of money from my grandfather's estate this summer and was planning on giving it to my brother and I for Christmas. And she wants me to use it on something for myself that I want - not to go towards paying bills. And she knows how much I want that Pixio.

So I'm definitely getting a Pixio!

Now, I already have a tripod that I can use. Two, even. One is my "good" tripod for my DSLR - I don't know if I want to subject that one to the dust in the arena since I often use it in the house. The other one is a cheap, short tripod, that would probably do the job.

But once I set it up to look at it, I don't know if I'm comfortable using it for the Pixio. Do I want to risk the $1500 setup of Pixio and camera with a flimsy weak stand underneath it? Not really.

So I ordered a new tripod to go with the Pixio (that I haven't ordered yet).

I bought the Slik Pro 700DX tripod legs. The legs come highly recommended. I'm not going to put a ballhead on it - the Pixio will screw right onto the legs, and the manufacturer actually doesn't recommend using a ballhead. The tripod doesn't fold up as small as I would like, but at the price I was happy to pay I can either get stable but not compact, or compact but not stable. I'll stick with the stability.

Then I started thinking about the case I would use to keep everything together. I was planning on using an older bag from a no-longer usable camcorder until I could get something better. I had put a price alert on a hard-shelled case from a Canadian chain store as they go on sale quite a bit and I thought that it might be a good option. Sure enough, the next week, they go on sale for 50% off. 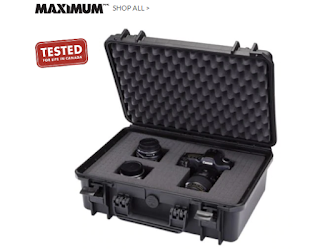 I sent Move n' See a message to get measurements of the pieces so that I could figure out what size of case I would need and scoured the internet to see if I could find any pictures from anyone using hard cases for storage. I got an idea of the size that I would need. And looked at other case options.

Originally I was looking at cases with the pluck & pick foam, where you pull out pre-cut foam cubes to make spots to hold the items in the case. And then I remembered that I had that type of foam in my big DSLR case. And I hated it. I was much happier with the options that the padded dividers I swapped it out with gave me.

So now I have a hard-shelled case with padded dividers coming my way for the Pixio I haven't ordered yet. 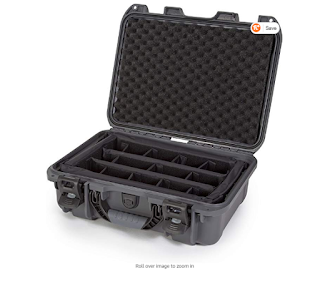 I ordered a Nanuk 920 case. Similar quality to Pelican cases. I actually like the latches better on them (it's what I have for my DSLR). And it's made in Canada - an added bonus.

I don't have any intention of upgrading the video camera (or so I keep telling myself). They're either entry level $300-450 (which is what I have) and then they jump up to closer to $900. That's far too much money to pay for something that isn't going to make me money.

So, apparently buying a Pixio is like buying a new saddle - it's never just the saddle. It's also a new girth (the old one doesn't fit), stirrup leathers (the old ones are the wrong colour) and a new saddle pad (some sort of $$ specialty pad). There's always hidden costs!

I'm hoping that the Pixio goes on sale in November. I don't know if I can wait much longer!
at November 04, 2019