I had an appointment with my family doctor yesterday, and she had the pathology report. The results - negative for malignancy! No cancer!

This was the best possible outcome for the circumstances. I mean, no one wants to hear that a part of them was cancerous, but then there's the realization that we took out an organ that didn't need to come out. No perfect win-win either way. However in order to get to this conclusion at least half of the thyroid had to be removed, and I've been on Synthroid for a few years already, and with the removal of the whole thing I'll just be taking a different dose of the same medication.

So I celebrated by getting on and going for a ride last night.

I did a quick grooming on Cisco. I was trying not to use up all my energy before I got on the horse, but my plan was slightly foiled. Phantom has lost a bit of weight again so I brought her in to eat some alfalfa cubes while I was riding. She came in with a big ball of snow on one foot that I had to remove before I could put her in the very lightly bedded stall. And I could not get that snowball out. I ended up grabbing my hairdryer and melting part of it until I could get the hoof pick under it enough to flip it out.

When I settled my butt in the tack, I felt the weakness in my body. Really, my only goal for the ride was to walk for 10 minutes, and anything above that was a bonus.

After wandering around on a loose rein, I decided to try a trot. Thankfully Cisco was game for it and gave me a relaxed forward trot with a little bit of sass that made me laugh. Some of the lesson kids entered the arena with some dishes of food for their horses post-ride. I'm not sure if Cisco was thinking of spooking at them or slamming on the brakes to try to mug them, but his shoulders bobbled for a couple of steps and then I bobbled and burst out laughing. The perfect release for my stress.

I didn't last long of course. A few minutes of trotting on a loose rein, then I asked him to round a little and drop his nose a bit, which he quite happily did, so I left it there. I still had to get horses put out.

And blankets changed. Because this was the forecast for the night: 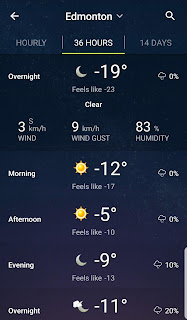