Despite getting Phantom's hocks injected in late August, I've been thinking that something is going on in her left hind. I wouldn't say she feels lame. Left lead canter feels slightly uncomfortable (but it's our tougher lead at the best of times). She's been a bit stiff/reluctant to bend to the left. And I keep seeing her rest her left hind a bit oddly. 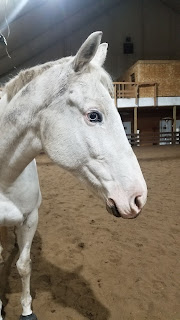 On Tuesday night I let her loose for a run after a week off. And confirmed my suspicion.

Her first couple of downward transitions from a canter looked like they stung. Not comfortable.

But it got better, and instead of bunny hopping behind she started to keep her legs separated and step into the walk or trot from a canter. So I'm hoping that it's just arthritis type stuff. She's 16, it's been cold and damp, and she hasn't been getting much exercise. All contributors to stiff joints. 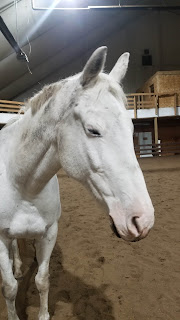 Not that I'm going to do anything about it at this point. I hope to get about 3 or 4 rides in on her over the next couple of weeks, then she'll likely end up with most of the next two months off. If there still seems to be a problem after I start her up again after Christmas I'll have her looked at at that time.

The good news is that her respiration has been good for the last month or so and I haven't had to give her any Ventipulmin. It definitely helped her this summer. Traditionally she is usually better in winter, although last year that wasn't the case. We'll see how this year goes!
at October 16, 2019