I'm behind on the whole blogging thing as of late. I feel like I've been super busy, and the little time I've been home and not sleeping has been trying to catch up on a few household things. My thyroidectomy surgery is next Tuesday - so far I've been far too busy to stress about that, but I'm sure it's coming!

Cisco has been giving me some really good rides lately. He's been super relaxed and trying really hard. We still have to work on our forward - I think that's going to be a lifelong issue with my naturally lazy-ish horse. I've been schooling a ton of transitions, including halt/trot, and he gets those pretty easily and with energy, and then as we are trotting around he settles himself into a trot that's just a little behind my leg. I'll be doing transitions within the gait for days and days. So exhausting.
Last night I really wanted to pop him over a couple of crosspoles. I had to wait until the beginner lesson was over, then a friend made a couple of adjustments to the jumps for me.

Cisco was super! We did the single crosspole a couple of times and he was straight and on a very light rein. He didn't put much effort into it, but we're still in the just get to the other side phase, so I'm not worried.

Then we attempted the line that had been a one to a one stride. Were not ready for that yet. But I left the placement pole in front and left the pole down for the first one stride. He looked but didn't really even hesitate and on the second time through had the idea of cantering over the pole. So I left it there, really happy with him. 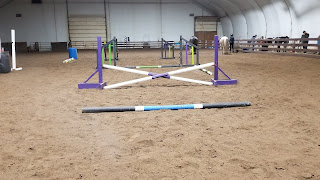 I was hoping to do something with Phantom to get her moving a bit but the expected crappy weather  had hit and I didn't want to be out too late. She's definitely sore in her left hock but it gets better with movement so I'm pretty sure she's decided that since it's gotten cold she's feeling her age. She'll just get some light work for the next couple of weeks as I can manage (not that I'll be up to doing much anyways) and I'll have to remember to bute her for her next farrier appointment.
I've got a few other rides and a lesson to blog about - hopefully I get them written up before I forget how they went!
at October 23, 2019