I have a milestone anniversary coming up at work at the end of the month. And I just discovered it comes with a cash prize.

Not a huge one. But a decent one to be able to do something fun with.

I should be a responsible adult and use it wisely.

But I have horses. So that isn't going to happen.

I'm not going to spend it on custom boots - which was oddly the first thing that popped up on Facebook after I found out about the money. They are still going to have to wait.

It might be this guy that I've long lusted for:

It won't pay for the whole thing, so I still have to decide carefully. I already have a camcorder that will work for it, so that won't be an extra expense. I also already have a tripod that should work with an inexpensive adapter added to it, so again, one less expense.

I'm thinking of allowing it to be rented out to people at my barn to record their rides (totally justifies the purchase, right?). I would have to set it up for them, they supply the memory card and take it home for any editing. I'm not sure if this would work well or not as trying to organize my schedule with someone else's might be a huge hassle. If it would work though, how much would you be willing to pay? I'm thinking $15 for an hour or so.

It's still in the "we'll see" stage. I don't think that there have traditionally been Black Friday deals on these units. If that is true again for this year, I'd wait until the new year to order it as I don't anticipate riding much November/December. They have a 14 day full-refund policy, and these things can still be a bit buggy, so I don't want to waste that period and not be using it.

It won't stop me for shopping for a storage case though.... (I'll be sitting on my ass for two weeks after surgery at the end of October - I know I'm going to buy something!) 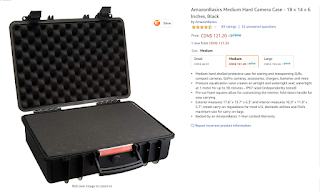 If you already have a Pixio, let me know if you think it is a worthwhile purchase or an expensive piece of crap!
at October 09, 2019