I had great plans for my Tuesday ride. It was a glorious 15 degrees and sunny when I left work, and I drove home with the window down and the sunroof open. I rushed to put my contact lenses in and get changed so that I could get at least one ride in before it cooled off for the evening. I didn't even put my long underwear on under my breeches (although I know that there is a pair in my car just in case).

By the time I got to the barn, the temperature had already dropped to 4 degrees, far cooler than it was when I left the city. No worries, at least the sun was still out.

Things started well. I fed Phantom her Ventipulmin and then brought Cisco in. I tied him up further down the barn than usual as other people had their stuff laid out in our usual spot. I groomed him and everything was fine.

Then the barn drama kicked in for the rest of the night.

Not the type of barn drama that involves gossip and mean girls. Nope, this was all horse drama. I had a drama llama tied up in the barn, and later a drama queen in the arena. Apparently the Oscar award nominations are already open for next year.

For some reason, while I went to get my tack, Cisco decided to start the dance of his people, otherwise known as the idiot dance. No idea why, and thankfully it's not a normal dance. It might have totally been an attention seeking thing, as it didn't appear to be nerves.


So I decided to wait him out. He's a very smart pony, and I don't want him to figure out that tap dancing will get him attention or untied.

There were many moments where he stood still for a few seconds, staring at me standing mostly with my back turned to him, and it's like he wanted to stand still, and then the devil by his ear would speak and the dancing would begin again. We laughed at him lots - he was trying to be big and bad but wasn't really good at it.

I'm sure it only took about 20-25 minutes before all four feet stayed in the same place for a couple of minutes, but it felt much longer. Unfortunately, that used up most of our time so I ended up lunging instead of riding. He was actually pretty chill in the arena so I was happy that when the dancing ended the thinking started.
So I was sure that I was going to have a nice, simple ride on Phantom. I tacked her up and took her over to the arena.

Since it's finally warm out, the annual flooding has started. This is only the second year that the barn owner has been in this facility, so she's still figuring out how to deal with the flooding from the snowmelt. She had some landscaping done last year, and it's definitely helping, but the path to the arena came up very wet and muddy this weekend. She put up some railroad ties to try to dam the water and had a sump pump going to try to move it where she wanted it.

We made it into the arena through the mud, in the dark, with no issue. I prepped Phantom to get on and led her to the mounting block, which positions her butt towards the door.

She saw something outside the open door that spooked her, and she zoomed past me and the mounting block to stare at it.

This is what it was. 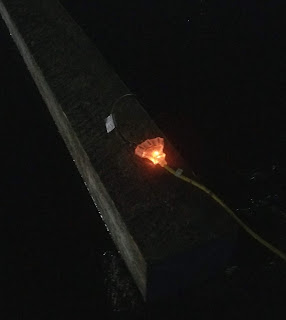 That is the lit up end of the extension cord that was powering the sump pump, resting on a railroad tie outside the arena door. Seriously.

There isn't much that gets Phantom concerned, but if it does, it's probably either something above her head, or a light where there isn't usually a light. This isn't the first time that a light has caused chaos for her.

I shut the door (at this point I wasn't sure if it was the light or not, but based on how she reacted when we walked back to the barn I'm pretty sure it was the problem) and tried to get her to the mounting block again. She's a bolter in these situations and was positioned like she might take off as soon as I swung a leg over. I had to position her on the side of the block.

Then I spent the next 8 minutes at a walk, on a tight horse, who was thinking about leaving anytime we got in the half of the arena near the door. It was 10pm and there was no one around - not worth the risk of falling should she bolt without warning as I know she can do. So I hopped off and free lunged her. She stayed in a 30 m circle at the opposite end of the arena, which she never does.
When we went back to the barn she gave that extension cord the hairy eyeball and gave it a good sniff. Total drama queen.

I'm out during the day on Wednesday, so I shouldn't have the same problem with Phantom. Not that she'll forget about it very quickly - she has the mind of an elephant for things that she perceives to be "bad". Cisco is going to be tied in the same spot in the barn for the next few days - hopefully, he's traded in his dancing shoes.