Dings in His Armor

Cisco has been my first horse who's been hard on his blankets.

I've had two mares - they didn't engage in hijinks that would do damage. My other gelding was always the dominant horse in his turnout, so nobody messed with him. I don't recall ever seeing him playing with the other geldings (they were likely terrified of him, although I think he just exuded dominance so he never had to be nasty).

Last winter was the first winter that I owned Cisco and that he was blanketed. He was turned out with a couple of other geldings, one of whom became his BFF. I saw them grooming each other all the time. I also had seen him having many games of bitey face with whoever would indulge him.

His blankets had a couple minor mishaps through his first spring with me - mostly things like the darts in the shoulder being pulled apart. Fairly easy to repair.

I decided to cover his winter blanket up with a Kensington fly sheet to try to prevent major damage through the winter. This suit of armor would hopefully take the brunt of the gelding play and allow the winter blanket to last longer. 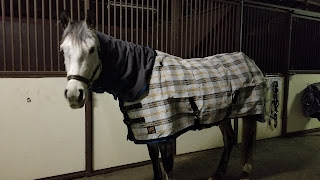 I also tried a Kensington hood at one point.
That was a complete fail.

The Kensington has done its job. Cisco's winter blanket has only needed minor repairs over the last two winters - the top of the tail flap was pulled away, and there have been some small tears in it.

However, the armor has taken some major dings, despite the fact that Cisco is turned out with a couple of mares this year.

I have a feeling that most of this damage has been caused by playing with his neighbouring geldings over the fence. Most of the damage is around the neck/shoulder and the butt.

This is actually the second Kensington - I swapped it last spring when I decided that the first one needed to be repaired. It's now patched up, and I should probably swap them out again so that this one can be rejuvenated.

I also picked a used one up this summer. I haven't needed it yet, but I'm pretty sure I will in the future. Anytime Cisco wears a blanket for turnout, he's going to be wearing his suit of armor over top of it for a very long time.