The sun came out, the planets aligned, and I managed to get both horses ridden on Monday. I mean, I had to use a lieu day at work to get it done, but it happened!

I didn't take the day off just to ride  - the plan was that I needed to go through my tack boxes in the garage and figure out what I wanted to take to the tack sale this weekend. I got through the easy ones that didn't need to be completely unburied, but I know I'll need to dig out the other ones. There are a couple of things I can't find and it's driving me nuts, and a couple of things that I want to get into use in those trunks. Probably some things to sell, too.

I left that for the end of the day. I was taking the best part of the day for myself!

I arrived at the barn just after 1pm. The ponies were soaking up the sunshine while standing in their shelters - there was a bit of a breeze that was quite nippy. I dragged Phantom out so that she could have her Ventipulmin in preparation of our ride. She was not impressed until she saw the bucket outside her pen. She ate and then went right back out and I grabbed Cisco.
Another person was tacking up and we headed over to the arena together. I hoped that another horse would mean that Cisco would be a bit chill since this was his first ride in almost 5 weeks. I lunged him first in the scary corner without too many issues, then a few times over the flower box from yesterday, then hopped on. He stood perfectly still and waited for me to ask him to walk away - that boded well for the ride.

I didn't do much with him - neither of us had done anything in a while, so we stuck to walk/trot. He stayed pretty relaxed, which also meant he was behind my leg, which I wasn't prepared for (meaning I didn't have a whip). He's been so overly forward for the last few rides I didn't think this was going to be a problem. I'll be better prepared next time.

The other horse left the ring, and I stayed on for a bit, curious to see how he reacted. He was a bit more reluctant to go into the scary corner, not bad or anything, but I did notice a difference. They had also left the gate open when they went out (with a closed door behind it) and I made sure that having to go past the open gate wasn't going to be a problem. Again, there was a slight difference, but nothing to make an issue out of.

He stayed relaxed while I walked him out, so I walked him out a bit longer than I might have otherwise. I remember watching a Carl Hester demo, and at the end of the demo they stretch the horse long and low, and he talked about not riding them like that for just a lap at the end of the ride and then done, but ride it for a few minutes so that they get used to carrying themselves that way. So I was going with the same kind of idea - Cisco was walking along relaxed, so I wanted to keep him walking relaxed so that he got used to it. At least, that's the theory. 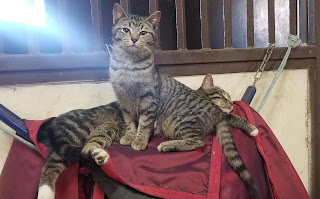 And then came my ride on Phantom. Ahh, Phantom.

She was feeling just a wee bit good. Her run around the arena yesterday did nothing to make today's ride easier.

She walked around doing her trail horse impression while I chatted with someone for our warm-up. Then we picked up the trot. A very zoomy trot. That only got zoomier the more we trotted.

And I'm a really crappy horse trainer because I just giggled through it all.

She steered - mostly. Dodging the sunbeam totally doesn't count. She came back to walk every time - eventually. When we went over the flowerbox and she overjumped it she came back to trot - a quarter of the arena later.

About halfway through the ride I said screw it and just rode the trot in 2-point and let her trot fast. Which got bigger and bigger and more up in front. So I made her do one lap in a proper frame and contact, and then called it a day. She's not at all fit, and I don't want to tempt a tying-up episode by letting her do too much too early.

I also had two horse parcels sitting at the post office that I picked up today. One had blankets - half-priced Weatherbeeta rainsheets. I got one for each horse, and they're both the same, and it's the same one that I already have for Cisco. So at some point this spring I'll have them dressed all twinsie like.

The second parcel had the headplate for my Wow saddle and the Flair adjustment kit. So now I just need to wait until the end of April for my flaps and then I'll hopefully be ready to get Cisco jumping tiny little jumps.

It was a great horsey day. Too bad that pesky job thing is going to get in the way again.