I finally figured out why Cisco is so spooky in the arena.

It's because he's alone.

Lately, I've had a good mix of riding alone and riding with other people, and a few times where we've started alone and part way through the ride another horse has entered the arena.

There is a marked difference in Cisco's relaxation when he is by himself versus when he has company.

When alone, he is fussy, distracted, worried, spooky, and overly reactive to noises. 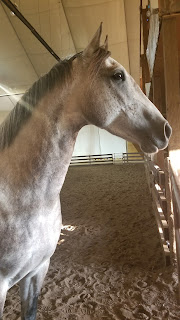 When in company, he can concentrate, he's not overly worried about noise, and he's far braver in the scary areas.

We've had a few rides that have started out super tense, then another horse enters the ring, and all of a sudden Cisco is chill.

Wednesday was one of those days.

I lunged him before getting on. He had lots of sass with some playing up during the initial canter transitions.

I got on. We had three spook scoots before we got to trot (pigeons were being extra flappy and annoying, a person came in and the person door scraped the ground, and the other one was when the raven outside croaked).

At a trot, he was either too fast or too slow, and his mouth was very fussy. There were fleeting moments where he almost reached forward and down into the contact, but then he would get distracted and start fussing again.

And then a couple of other horses came into the arena. All of a sudden, the spooky end wasn't going to eat him, the birds were no big deal, and when the people door opened again he barely flinched.

We did a (very) short bit of canter, and I had plans to do some more canter, but he suddenly offered the forward and down stretch at a trot, to the point that I had to put my hands forward quite a bit for him. It wasn't straight, and it needed way more impulsion, but it's the best attempt that we've had since getting started again this spring. I went with it.

I was going to be done after his nice trot, but I really wanted to try a crosspole and see how the saddle felt.  The only jumps set up in the ring were at weird angles to each other so I had to use a shorter approach than ideal. We only did it twice, and both times I felt really secure in the saddle, even on the second attempt where he totally overjumped it - although I totally grabbed mane.

So, I apparently just need to organize ride times with someone else forever to keep Cisco relaxed.
Since that's not practical, does anyone have any suggestions on how to get Cisco more comfortable being by himself? Other than time and miles?
at March 29, 2019