Isn't it amazing how horses can always sense when we have great plans and find a way to foil them?

I got out to the barn on Wednesday a little before noon so that I could have both horses ridden before their dinner time. They both are in diet paddocks so dinner is a big deal to them. And they both live with other horses, so if they are absent at dinner it gets difficult (and lengthy in time) to make sure that they get their full hay amount. Thus I try to ride before dinner on my days off, and by the time I get out on work days they've already eaten.

Anyhoo, I went out to give Phantom her Ventipulmin before riding Cisco so that it would have a chance to kick in for our later ride. It's spring and it's muddy. She had obviously been on the ground at some point. But her face was weird - she had mud around her eye, and it looked like it was wet mud that dripped down her face. 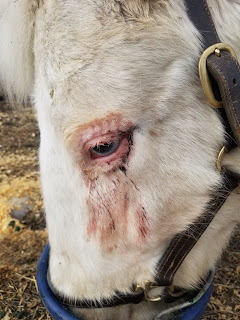 It looks like she cut the top corner of her eye. There is no soreness, oozing, or weeping from the eye itself, so I think she just missed the important bits.

Phantom is a drama queen. She is a horrible patient who dislikes anything that makes her uncomfortable. I knew cleaning this wasn't going to be easy.

I loaded up my pockets with treats. This is where clicker training pays off. 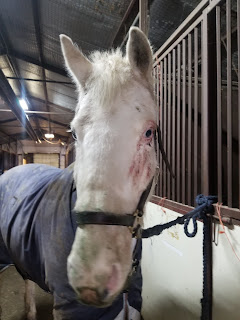 I used baby wipes soaked in warm water. The goal was just to remove the blood - I was pretty sure that I would be lucky if I managed to get that far.

She wasn't as terrible as she can be, but I didn't really get to the sore part very much. There was no way that she would let me do anything other than just lay the warm wipe on top of it. Just doing that resulted in drama.

Whenever Phantom gets a cut she tends to blow up. I looked at her about 4 or 5 hours after I had first seen it, and there were no signs of puffiness around her eye, so I'm hoping we're in the clear. I left some bute out just in case it's fat in the morning though.

She also broke one of the plastic buckle things that the stomach straps on Rambo blankets attach to. Pretty sure that when I bought the blanket it came with a spare one, but that was like 6 years ago, so I have no idea where it would be. I'm hoping a local store carries them or can get them in a timely manner so that I don't have to order online and pay for shipping that exceeds the cost of the pieces.

I had planned to still ride her but ran out of time. Apparently, she and her buddies got some exercise in though - they were scraping the winter poop in the paddock with the skid steer and the horses were all being idiots and running around. I was worried about Phantom's shoes if she was galloping through muck but they were still attached. I hope that equals free lunging and she isn't too silly when I get to ride her this weekend!

Email ThisBlogThis!Share to TwitterShare to FacebookShare to Pinterest
Labels: Phantom