In Search of Something Brown

My paddock boots are dying.

The left boot has a hole in it, that is down to whatever the inner layer is (feels kind of felty). The right one is in slightly better shape, but has many cracks in the leather.

They were the Ariat Cobalt Performers, and I think I bought them in 2010, so they are about 8 years old. I don't tend to look after my paddock boots all that well - they've probably been cleaned about 4 or 5 times in their lifetime, 2 of which would be this summer since I picked up some Urad polish for them. Once they are on, they're on and don't come off when I need to bathe or tromp through mud.

So it's time to replace them.

They were my second pair of Ariat's, so naturally I looked there first. It looks like there are two reasons why I don't think I will be buying new Ariats. First - there seems to be a general consensus that the quality has decreased significantly. And second - the higher end versions don't come in brown.

Not being available in brown = dealbreaker.

I have two pairs of brown half-chaps. And a brown helmet. I want brown paddock boots to match dammit.

So, time to shop online.

It's hard to find options up here in Canada other than Ariat. Especially brown options. The local tack shops don't seem to carry anything other than black Ariats.

The leader at the moment I think is a pair by Cavallo, that I can get from Calevo in Germany. They work out to be about $245 CDN (including shipping), which isn't that much more than the Ariat Heritage paddock boots would be ($200 plus shipping).

They have elastic laces in the front that you don't do up, because they have a zipper down the back that you use to put your foot into the boot. I'm not sold on the zipper, but it seems to be the way a lot of the boots are going. I won't do the zipper front jodhpur boots as they never seem to fit my foot. 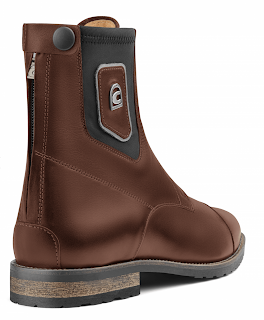 I don't suppose there is anyone out there who wears a size 7.5 in Ariats that happens to own a pair of Cavallos that can tell me what size to get? I'm leaning towards the 38, but I've been seeing discrepancies as to if they fit true to size or a bit big. The 38 should allow me to get some big socks in them in the winter, and I don't know if that would happen if I went down a size.

I am just trying to decide on when to bite and order them. There is a used tack sale in mid-October that I'm going to take some stuff to, and should probably wait until then. But, last time I ordered from Calevo it took almost a month to arrive, so maybe I should start the process now????

I need to place the order before I start finding other things to add to it. I'm definitely adding a few more Haas brushes to my collection, I just have to decide which ones.
at September 26, 2018