What's Cisco Up To?

So, what's Cisco been up to lately? 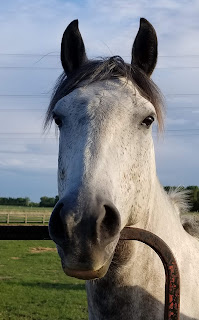 He got ridden twice last week - the first time was only the 3rd ride in 3 weeks or so, so it was of the just try to regulate pace and remember how to steer type of ride. The second ride we threw in a bit of canter. He was actually really good for the first ride since there were a few horses in the arena, and for the second ride he was spooky and looky because he was by himself.

And then he got a few days off. I had tickets to The Book of Mormon on Tuesday, Wednesday was farrier, Thursday I can't ride due to work. Friday I rode Phantom, and Saturday I stayed home under my warm blanket as it had snowed most of the day and I just didn't want to be cold. On Sunday I rode Phantom and lunged Cisco since it was almost his dinnertime. So Monday was his night to be ridden.
Again, he was kind of spooky. Just looking for an excuse to scoot. He thought he had a good reason when the door opened up at the far end and a couple of horses magically appeared through the portal. He was pretty sure that something else was going to come through that door the first few times we walked down there, but he got over it with only a little drama.

It was the kind of ride where he wasn't super fantastic, but wasn't bad either. He had some moments of reaching for the contact, but wasn't overly fussy when he wasn't there. He steered, he went when I put my leg on, nothing exciting to write about.

Cisco is starting to figure out the canter transition. As in, he is starting to associate the aids that mean canter. We've had a couple of immediate transitions over the last couple of rides, which is a big improvement. It's partly anticipation because I'm asking in the same spot, and Mr. Smartypants figured that out pretty quickly. But hey, anticipation can be your friend when teaching something new!

We've got lots to work on, but none of it is exciting. And I hope it stays that way for a while - non-exciting rides can be good things!
at September 25, 2018