For the last three or four summers, Phantom has had some respiratory issues - namely a cough and some laboured breathing while under saddle. I had her looked at one summer (which was the summer that there seemed to be a cough going around at more than one barn by all accounts) and the vet said she might be a bit heavey. It seems to be a seasonal problem, from summer through early fall.

This summer I pulled her out of the field that she had been all winter in late May. That field was fed from a round bale. I wanted her off the round bale to try to avoid problems this summer and because she needed to lose some weight.

I also added Spirulina to her diet. 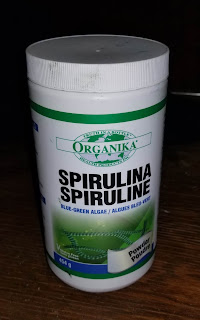 Basically, it's blue-green algae. Aka - seaweed.

It's considered a superfood, and some say that it is the most nutrient dense food source on the planet. It's very high in protein and amino acids, and is thought to have anti-histamine properties. It is for this last reason that I considered adding it to Phantom's food. Well, that and the many, many anecdotes online of how it benefitted horses with heaves or allergies.

Being seaweed, it has a fairly strong odour. And likely a strong flavour - I haven't tried it myself, but Phantom was not impressed in the beginning. I started out adding it to apple sauce by itself, then was able to add her grain to it. I tried adding a touch of Stevia sweetener instead of apple sauce to it one day, and that was a success. I've since progressed to adding it to her feed, which includes beet pulp, and she is happily gobbling it up. It took a couple of months though.

I put Cisco on it also as he was coughing a bit this summer, and since he's not picky about what he eats, I don't have to do anything fancy to have him lick the bowl clean.

Do I think it made a difference? Most definitely. This was the first summer out of the last four that I was able to ride her for most of the summer (well, except for the crappy air quality, and you know, lack of time). Most telling is that if she hasn't had it for a few days because I couldn't get out to the barn, she will cough, but once she starts to get it regularly again the cough disappears. 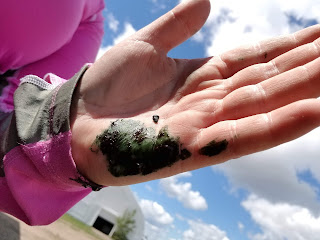 And once that stuff dries, it does not come off easily.

The cost isn't too bad. The first bucket I picked up was from Herbs for Horses - a 1 kg pail that was about $68 at a local store. Feeding about 10g per day would give me about 100 doses from that bucket. When I had to buy some more later this summer that store wouldn't get another order in for a few weeks, so I shopped around online and found some human stuff that was on sale from a health-food store that worked out to be the same price per gram. (There are people who voluntarily eat this stuff out there- amazing!)

I'm definitely going to keep Phantom on spirulina through the summer months going forward. I'm not sure about the winters- she is generally better through the cold months, and I tend to not be out consistently enough for her to receive any benefit from it.