Not much happening around here this weekend. Or for most of the upcoming week.

It started to snow on Thursday night and ended Saturday morning. Roads were terrible - the drive home from work took me 50 minutes instead of the normal 30, and that was before the worst of rush hour hit. 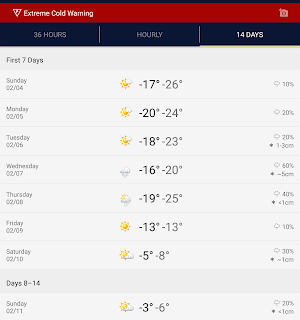 There is light at the end of the cold, dark tunnel. The weather is supposed to take an upwards turn next weekend and be hovering around the freezing mark for the following week. Mind you, it was supposed to start warming up mid-week this week. But the cold seems to be staying longer and longer.

Since the roads were crap and it was so damn cold I didn't head out to the barn this weekend. So I did crafty things at home instead.

I decorated the two polar fleece neck warmers that I had bought at the dollar store.

The wall behind my couch in the living room is a horse photo wall. It's still a work in progress. I've wanted to put the names of the horses that I've owned on the wall and finally decided on how to do it. Not sure if it will stay this way or not, but it was an inexpensive project. I picked up a few of the frames at Ikea on a one day sale for $0.97 and just used some decorative paper for the background. The names are on the backside of the glass, so if I want to change the background it would be super simple. 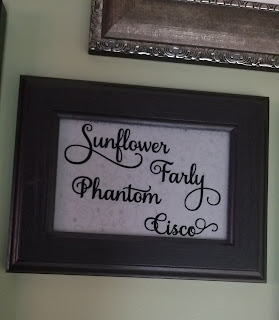 And then I decorated a couple of shirts for myself. I shamelessly stole the idea from somewhere on the internet, but had to make my own version of it.

I also did an older shirt as a trial with my blog name down the length of the sleeve. Not sure how much I like it. Maybe it's the colour (blue glitter), or maybe it's the font. I'll see if I learn to like it.

I will head out to the barn on either Monday or Tuesday, mainly to swap Cisco's suit of armor for the new one that arrived. I really hope that the forecast for next week doesn't change - unless it's to get warmer!