Guess who is now old enough to buy her own booze and vote? 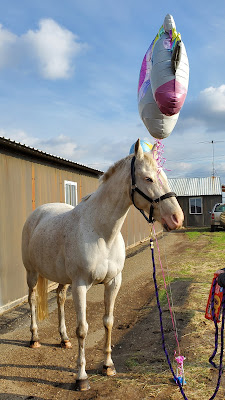 Phantom turned 18 on Friday, which is the age of majority in the province in which she lives. She's officially an adult. 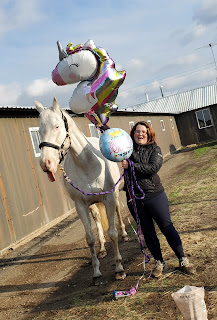 Is a birthday party a party if there aren't balloons? No! So guess who got balloons for her birthday?

It was just windy enough that the helium inflated balloons had a hard time staying upright so we had to more to a less picturesque location than originally planned.

Obviously, Phantom wasn't too concerned about the balloons. Once she booped one of them they were no big deal.

She was far more worried about the lack of acceptable cookies.

I had picked up a pack of strawberry turnover cookies. They were deemed non-edible. I had to dig a bag of regular horse treats out of my car to make up for her disappointment.

The old grey mare is getting older. Hopefully, I get a few more birthdays to get the cookie selection right