I've been having some great rides as of late. The weather has been perfect riding weather, the ground has mostly dried out from the spring thaw and the rain hasn't hit yet, so I've been trying to spend as much time riding outside as I can.

My friend T got a new horse a little over a month ago so we've been meeting up to ride together. Our rides are generally spent in the arena for 20 - 30 minutes, then toodling around outside. It's been fantastic.

Wednesday was jump lesson day at the barn. I usually try to avoid riding in the arena during these lessons, and since it was so nice, I decided I would ride outside and do a bit more than toodle.

I rode Phantom first. This was only her third ride in the last month, and first ride of the season outside. Thus I hoped it wasn't going to be more exciting than it should be. 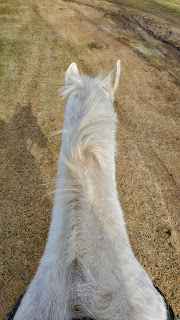 It wasn't. She was wonderful. We wandered around the yard and to the neighbours for about 20 minutes to start, then came back and trotted around the big field next to the arena. I haven't figured out where all the gopher holes in the field are yet so we kept it to just a trot, but it was enough for her to sweat under the saddle and need to be hosed off. 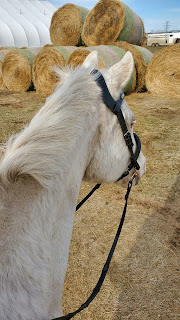 T finished her lesson just as I was getting on Cisco, so she and another lady joined me for a short toodle at a walk. Then I took Cisco into the field to do a bit of work.

I was actually really happy with him. After being behind the other horses on the walk, he walked away from them into the field without any issue. Again, we kept things to just a trot, and for the most part he steered where I wanted him to go and maintained an even pace that wasn't too outrageous. Our sticky right bend was pretty non-existent, but that's going to be his default under stress for a good while to come.

He did lose his brain at one point. Someone had trailered in two horses for her lesson. One was staying overnight for a morning vet appointment, so was put in a paddock, and was whinneying. The other one was being put on the trailer, or as Cisco likes to refer to it, the murderbox.
We were walking, he was trying to keep his brain in his head, but after the screaming horse and the horse banging inside the trailer, having the truck start up behind us broke his brain for a moment and he bolted. We were back to walk within about 12-15 strides, so it wasn't the end of the world.

We walked a stressed lap of the field before I said screw it. I did the TRT Method turns that we've worked on over the last couple of years and felt Cisco soften a bit through his body through the turn. We halted, and a couple seconds later he let out a deep breath. And with that, his brain function was restored. We walked another lap of the field on a loose rein with his head half as high as it was on the previous lap. I decided that was a huge win and a good place to end the ride.

I'm really enjoying these laid back rides outside. We're supposed to get some decent rain next week, and with that the mosquitos will probably come out. That will end the enjoyment of riding in the grass!
at May 02, 2020