Friday night I got home from work, put in my contact lenses, and got changed into breeches. I planned to ride Phantom since I hadn't managed to get her done the day previous.

Then I checked the weather forecast one last time before heading out the door. 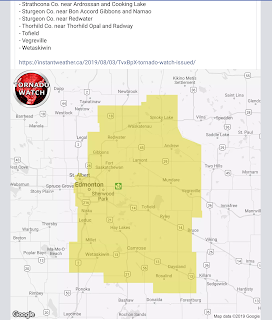 I got the thunder and rain at my house, but thankfully didn't get the golf ball-sized hail that hit many other areas of the city. Lots of pictures of car windshields with big holes in them all over Facebook. The storm also hit the barn so I had to check out my trailer - no damage to the roof vent was noted.

So I didn't get back out to the barn until Sunday.

Phantom was ridden second. She had her typical easy ride. She was actually quite laid back considering that she hadn't been ridden in a week. I actually had to kick her forward for our first trot transition.
I changed up Cisco's bit again. An ad popped up somewhere for the Acavallo Sensitive bit, which I would like to try, but I don't think he'll like it because there isn't any room for his tongue. So I started thinking and researching other options, and decided that I'd try Phantom's Neue Schule Tranz-Angled Lozenge Baucher.

I didn't necessarily pick the best ride to test the new bit - Cisco's girlfriend had been in the arena when we went over, but left right away. So they both had to scream at each other for the next 25 minutes until Cisco started to get to work.

After that, he felt pretty good. He wasn't as fussy in the baucher as he was in the Herm Sprenger I tried a couple of weeks ago and I think I like the feeling a wee bit better than the Happy Tongue he's been going in. A very small bit better.
Cisco was sharper off my leg this ride than he has been. We had some nice leg yields, and a very relaxed canter (although the transitions still sucked). We also managed to do our 3 minutes of canter goal (well, 2:52 - close enough).

I'll definitely try this bit again. If it works out as a better option I'll have to decide what to do - do I buy a second of a bit I already own so that each horse has one, do I set up a bridle that I can use on both horses (they're really close in size), or do I just change the bit onto the bridle of the horse I'm riding each time? Decisions, decisions!
at August 05, 2019