One of the most important parts of a rider's wardrobe is a good sports bra. Sitting the trot without any support is not comfortable or pretty - no one wants to see "two badgers engaged in mortal combat" as so eloquently described on a recent Facebook post about her brassiere failure while giving a demonstration ride.

As I gained some extra fluff over the last few years, I've had to make adjustments to what type of support I prefer. I like the girls to be locked in place with no movement. I don't mind a tight bra, and I prefer to wear underwire, for the support and also for the shape - I dislike the dreaded monoboob.

Full disclosure - my bra size is 36D. My boobs are full on top and fairly high up. If yours are different you might not like the same kind of bra as I do.

So here are the bras that I have and my opinion of them.

Moving Comfort Fiona and Maia bras
These were the first bras that I bought about 7 or 8 years ago when I starting riding again. I was also trying to be a runner at the time and needed a high impact bra for that activity. I liked them so much that I ended up owning about 5 of them (mostly bought on sale). They wore very well through many washings. The straps were adjustable using Velcro. All of these bras that I own are a size too small from my current bra size - they are still wearable, but there is a bit of boob overflow at the top, and on one of them the straps Velcro up at the very end and might come undone while I'm wearing it. They are out of my regular rotation at the moment but I'm not going to get rid of them.

Moving Comfort was bought out by Brooks a couple of years ago, and I've read that that new versions are not as good as the old versions, so YMMV. 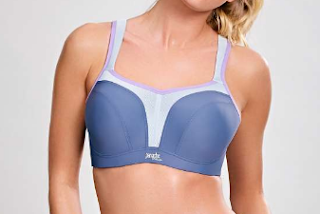 When I decided that I needed to go up a bra size, this was the bra that I bought. I tried it on at a trade show and took it home. I absolutely love this bra - unfortunately, not for riding. Likely because I am short-torsoed, I need to put the straps in the racer-back configuration in order to get full support for high-impact activities. The straps then put a strain on my collarbones and become very uncomfortable.

For everyday wear though, this bra is fantastic. It's comfortable and supportive enough that nothing bounces when speed walking or going down the stairs, and since it has underwire and encapsulation, it keeps the girls up and perky. If I could afford them I would happily pick up a couple more and wear them every day to work. They cost about $80, but I've seen them on Amazon for about $45.

I know that this bra is a favourite for many riders. I love it for everyday, just not for riding. 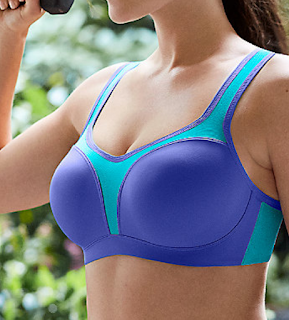 Kind of similar to the Panache bra, but I like this one for riding. Underwire, encapsulating cups. No monoboob here. Fits true to size. They run about $90, but I picked them up on clearance for about $50 (for Canadian viewers, keep an eye on The Bay's website). I liked it so much that I bought a second one. These are probably my current favourite for riding.

I have a different Wacoal sports bra that has a zipper front and racerback - it doesn't seem to be available anymore. Super supportive, but the band is tight. Okay for the amount of time I would be out at the barn, but I wouldn't want to wear it all day. 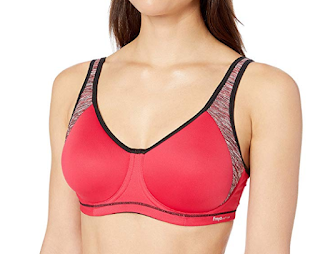 I managed to find this one on Amazon for about $30. I wasn't sure what it would be like for riding, but I figured it could at least be a backup for the Panache bra for everyday use. I was pleasantly surprised by how much I like it.

The inside of the cups are different than any other bra. They have almost a sling around the outside of the cup (on the inside) that is made of non-stretch material that supports your boob. It feels like a bit of a light-weight bra but does a really good job of supporting through a ride. I always forget that I'm wearing this one, which is the mark of a good bra.

It's not perfect - the underwire sometimes digs a bit into my arm, and if I've worn it for 8 hours I'm happy to take it off. But for riding, I don't mind it at all. 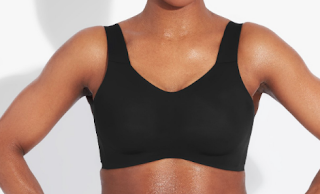 I have a love/hate relationship with this bra.

It's the most expensive of the bunch - I paid about $85 for it. Knixwear doesn't have traditional bra sizing, so I used the chart and decided to order the recommended size 5.

When I put it on for the first time, I could barely pull the two pieces together to hook them up. (For sports bras, I hook them up in front of me by my waist and then turn them and pull the straps up over my arms. Good sports bras don't have much stretch in them and are hard to do up behind you with no stretch.) But I got it done and wore it out to the barn that night.

And thought it was going to be a dud. The hook for the straps sat right on top of my shoulder blade and bugged the hell out of me. But it seemed supportive enough, so I figured I would keep trying it.

That problem went away after the first wear. Not sure why - I think I adjusted the height of the straps, so maybe that did it.

The bra is very comfortable, and although it doesn't have underwire, I have no complaints about the support.

I do have a couple of concerns about it. First - remember how I could barely pull it together to hook it up on the first wearing? Well, it has stretched over the last 6 months with fairly minimal wear so that now I sometimes do it up on the second set of hooks. I question its longevity. Second - the height of the straps adjust by slotting the hooks into a slot on a tab at the back. The hooks come out very easily. Every time I wash it (in a mesh bag in the washing machine) the straps come undone, and one strap came undone between riding horses one day.

So I'm torn on this one. I like it, and will keep wearing it. But I don't know that I would buy another one (maybe at half price) or even recommend it.