Phantom - Take Two for the Week

I was definitely going to give Phantom some more time to let the Ventipulmin kick in after my attempt at a ride on Sunday. On Tuesday, she got her drugs early and had lots of time while I rode Cisco. Unfortunately, I ran out of time to ride her. I wasn't done with Cisco until about 9:30 pm, and I didn't have it in me to ride that late.

Plus, I didn't want to have to try to get her clean. 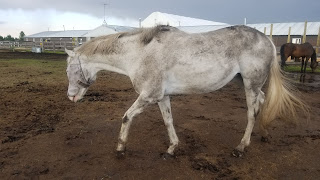 So I put her in the arena for a bit of a play instead.

There seemed to be no issues with her breathing on this night.

The next day she was my priority ride. I got out in the afternoon and gave her the Ventipulmin again, though I didn't wait before getting her ready for a ride. It was less than 24 hours since her dose the evening before, and I wanted to see if it would still be working.

Thankfully it was. I didn't notice any issues through the ride. I think she had a couple of coughs when we first trotted, but I generally don't worry about those.

Yet again, Phantom was feeling pretty good. We had a great lengthened canter where she felt like she was leaping up (in a good way) every stride. It was a blast!
The last couple of rides I've gotten on in the arena with the intent of doing some schooling, but quickly scrapped the idea and we've exited through the end gate and door and gone for a walk outside. The gate and door were closed this time so escape wouldn't have been easy. Phantom kept looking wistfully in that direction every time we passed on a loose rein. She made it very clear that she was hoping the door would open and that we could go through it! If it ever stops raining I'll have to get her out for a good exploration - hopefully before all the mosquitos that are now inevitable come out.

So I'm not sure if the respiratory issues that we had on Sunday were an environmental thing, or as I suspect, she just didn't have enough time for the drugs to do their work. I'll do my best to allow her at least 2 hours before riding from here on out and see if I have issues again.
at June 28, 2019