Since I bought a black jump saddle for Cisco, I naturally needed a black breastplate to go with it. They're not common in North America - jump tack tends to be dark brown out here - but are pretty easy to find overseas. So I knew that is where I would be shopping from.

I also knew that I wanted a 5 point breastplate. I've had issues with lateral saddle slip on my propane tank of a horse and in theory, a 5 point helps to stabilize your saddle a bit. (Saddle slip has not been an issue with the Wow saddle though, much to my surprise and glee.)

I'm kind of picky though. I didn't want brass fittings (Dy'on), or coloured elastic straps (Flexible Fit), and it needed to come in cob size (Passier). And I really wanted a specific style.

My options were narrowed down the BR Heywood and the Kentaur Torino. The price on them both was about the same after shipping, but the Kentaur was slightly easier to find in-stock. The Kentaur also came with a running martingale attachment, which the BR did not. So when I received a message from Kentaur Australia saying that all breastplates were 15% off, I bit the bullet and ordered it (while holding Phantom for the farrier).

I ordered it on a Wednesday and it arrived the next Tuesday. Pretty quick!

The leather seems to be a good, sturdy, workman leather. Not overly soft and supple, but the kind of leather that only gets better with regular use. My kind of leather.
The yoke part that goes against the chest is nicely padded with soft padding. 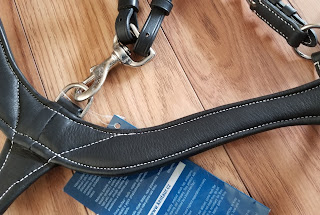 The elastic part that goes to the girth on the sides has a non-stretch strap stitched inside the loop - I would imagine to reduce the wear on the elastic. 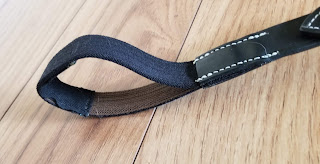 I do like me a fancy stitched bridle, so I should like the white stitching on the breastplate. I can't decide if I do or not - maybe if I had a bridle to match it I would be more enthusiastic about it. But that's minor. 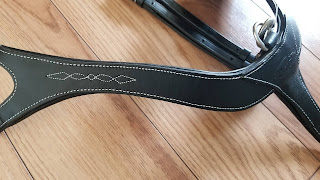 The one annoying thing that I didn't think about is that the girth loop doesn't have a clip, and it's stitched shut, so adding a clip isn't going to be super easy. Anybody got any ideas on how to add one that doesn't look too clunky?

Now - the important part - how does it work on the horse? 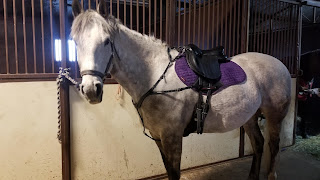 I bought cob sized for Cisco. He's not tall, but he's very wide in front.

It took a few adjustments to get the fit that I wanted, but I think it fits him pretty good. It's on the biggest setting on the sides and on the straps that attach to the D-rings at the pommel. 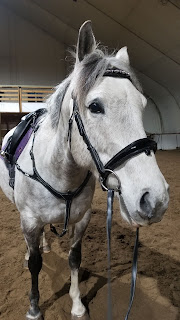 I really like the shape of the yoke at the front. Because he is so wide, I wonder if a full size for that part would be a slightly better fit - I don't know if it would be better for it to be wider and have where it splits a bit more behind the point of his shoulder. 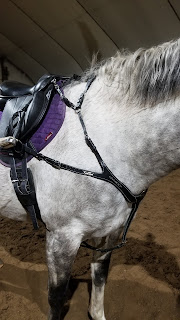 I have the side strap to the girth kind of angled up. I just didn't like the fit when it was straighter.

I still have to find a way to attach a clip to the bottom girth strap - right now I've got a clip being held on by binder twine. I'm waiting for a different style of girth to arrive for Cisco, so I'm not going to worry about it until that girth arrives.

Initial impression - I'm pretty happy with it. It looks good - the first two people who saw me ride with it commented that they loved the style. I'm good with the quality of leather. I think that the cob size is on the slightly smaller side, but very slightly.

Cisco had no complaints on the first couple of rides with it on. Fingers crossed that he doesn't decide that he can't move his shoulders over a jump while wearing it in the future!
at April 22, 2019