Cisco has mostly settled into his diet pen. He is surrounded by mares - he has two female roommates, and another two in the paddock next to him. He's used to mares - he spent the first five years of his life as the only boy on the property. He's smart enough to stay away from them when they're crabby, but should he be invited into their space, he's happy to turn on the charm.

Hence all the squealing over the fence on Sunday morning.
I managed to get each horse ridden only once last week. Cisco was ridden on Saturday, after he had a week off. We weren't too successful at getting any moments of "on the bit" work, but we had a couple of really good walk/trot transitions. 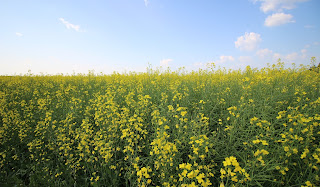 And then the rest of the ride was one of those green horse rides. The kind where you just can't do something.

That something - pick up the right lead.

We're still doing the kick and cluck transitions to get a canter, so there is little finesse. Up to this ride, I think he's picked up the correct lead all but once. But on this day, it just wasn't happening. 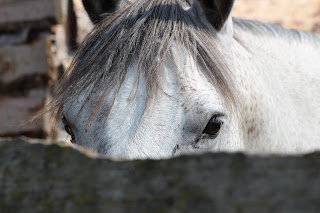 I changed up where I asked - into the corner, out of the corner, on the open part of the circle. Nope - Cisco picked up a nice balanced canter on the left lead each time.

I finally had to resort to my (almost) never fail method of picking up a sticky lead - ride straight  across the ring towards the wall, turn kind of last minute and ask for the canter at the same time. Sure enough, it did the trick!

I'm not going to stress about this happening for one ride. He naturally is right-sided, so I'm sure it's not a physical thing. Unless he's a bit out of whack from trying to stay away from his new crabby roommates.  Every horse I've ever ridden seems to have the odd day in the beginning where this is an issue, and making a big deal out of it will likely lead to other issues. He picked up a canter every time I asked - that is still progress! 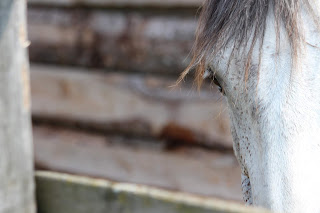 We've got one more 30 degree day to get through, then it's supposed to cool off - just in time for another week of vacation!
at July 30, 2018