There was a clinic on at the barn this weekend, so the arena wasn't available during the days. Which, for the most part, didn't affect me, since I had to work Friday and Saturday during the day. I went out in the evenings to ride, and had a completely empty arena to myself.

Since Cisco hadn't been ridden in about 10 days, I popped him on the lunge line first. As I expected, he didn't do anything silly and lunged quite well. Even down at the scary end. So I got on. And discovered that he had held onto all of his sillies until I got on (which I also totally expected).

Now his sillies aren't really much to worry about - he just turns into a speeding giraffe, which is not much different than the slightly quick giraffe that he normally goes around like. Steering, especially at the beginning of the trot, tends to be considered by Cisco to be a suggestion.
For the ride on Friday night, I was determined to control the pace. I was aiming for forward, but not mach 1. We had to do a few walk/trot transitions in the beginning to get my point across, but for the most part, he was pretty good about it.

What he was really bad about, was the steering. Not just the can't go straight down the long side type of steering issues. No, there was a new problem.

All winter I've been working on getting Cisco comfortable in the scary end. Through the winter the doors were shut, and the pigeons got picked off by an owl, so we were making progress. Now that it's warm again, the doors are open again. Which means the pigeons are back. And the threat of a Land Shark attack is significant.
Or is it?

Not this year! This year is different because there aren't Land Sharks outside the big door at the end of the arena. There are horses. Horses that Cisco hasn't met yet. Which he would like to remedy as soon as possible.

So now, instead of steering nicely when circling across the arena at the happy end, he bulges out towards the scary end where the unknown horses are. Bulges out big time. And down the long sides he rushes towards the open door. All winter I couldn't get him near the door, and now I can't keep him away from it.

So yay. A new issue to deal with. Which continued into my Saturday ride.

This ride did not start off promising. There were a ton of distractions to deal with. 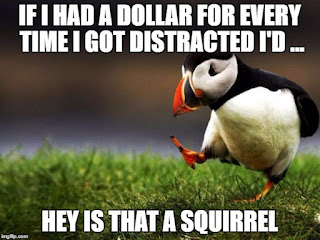 It was windy. We shut the overhead door that we entered through so that I wouldn't get sand whipped in my face as I rode toward it. The people door was left wide open, and the wind was whistling as it came through that door. Just outside that door there was a party going on with the clinic participants, which included singing Happy Birthday at one point. They also walked into the arena at random times to use the kitchen or the bathroom. Just inside that door was a tall stand that the clinician had some stuff set up to sell, and it was covered with a couple of sheets, that flapped around on occasion. Plus the table next to it with a tablecloth and sign attached to the front. There were stands set up with loud speakers at one end. And a storage shed had appeared overnight next to the bleachers.

So much for Cisco's brain to take in. He was very tense. But surprisingly not very spooky.

Again I controlled the pace. Even at a walk. Yes, he was still a giraffe. But he was giving me inside flexion when I asked for it, and mostly steering from my leg. Until I tried to cut across the arena at a trot and he bulged his left shoulder out towards the open door like he did the night before. But this time, I was prepared. I was carrying a jump crop in my left hand, and I gave him a couple of taps on that shoulder. By the third or fourth turn the bulging was significantly decreased.

I decided to put his busy Andalusian brain to work and started doing a whole bunch more turns. Mostly half circle reverse type figure 8's and three loop serpentines. I tried to keep a rhythm to the trot, and picked the point on the track where we were going to return to it. He generally tried to rush a bit on the straight side of the half circle reverse, so I had to slow him down. And that left bulgey turn issue? Not a problem - we hit the rail every time just where I planned.
So I ended up quite happy with my ride. Probably because I had very low expectations for how the ride was going to go. I need to figure out a way to deal with Cisco's tension though. I'm pretty sure that just riding more will make a big difference, and then I'm hoping that the Bombers bit that will hopefully arrive in a couple of weeks will help. Otherwise, I'm thinking that I just need to put him to work and keep his brain busy.