I'm pretty sure that the bit I'm using for Cisco is not "the" bit.

He definitely did not like the single jointed eggbutt I first tried with him. He put his tongue constantly over the bit.

I then tried a couple of double jointed snaffles - a french-link (with a rotating link) and the Neue Schule Verbindend. He rooted down really badly with both of these bits. He also salivated a ton - which I read could mean that he wasn't moving his tongue to swallow. I also tried Phantom's Neue Schule Tranz Angled Lozenge Baucher - that was also a definite no.

Because of that, I tried a Myler Low Port Comfort Snaffle. It has a low port that gives the tongue some space to move around.

It's been the best so far. But he is still very fussy with his mouth - opens it, moves his tongue around, pushes his head forward, and roots down when stressed. So I don't think he's overly comfortable with it still.

How many rides does it take for them to "accept the bit"? I think we should be past that stage, so I'm looking for other options.

I think I'm going to try a Bombers Happy Tongue bit next.
From the Bombers website:

The Loose Ring allows for immediate release and relief from tongue and bar pressure. The bit is immediately reset to a neutral position in the horse's mouth.
The Happy Tongue is a solid mouth piece. It is curved and ported to give tongue relief. The Happy Tongue would be a good place to start if your horse is:
The rider will know immediately if this is the correct bit, as a horse with a sensitive tongue will finally begin to work into, and accept the contact. Changing the cheekpieces would then allow the rider to adjust the level of control.

The coughing thing - he's had an occasional cough lately. Now, I've heard it when he's loose as well as under saddle, so I'm not totally convinced that it's bit related. But when he has done it under saddle it seems to be when he is stressed and busier with his mouth. This is the first reference I've seen to a cough possibly being bit related which I find interesting. 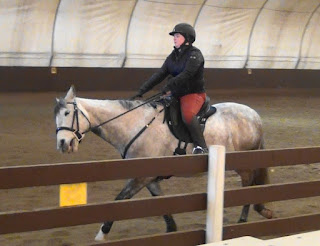 The bit has received many favourable reviews and apparently is a top seller. I'm not sure about dressage legality (it's very similar to the HS Comfort Mouth Snaffle, which is legal in Canada), but that's not something I'm worried about.
It's not a cheap bit, but it's not Herm Sprenger KK bit pricing either. There's a place in my province that has some coming in and they're $135. They are due to arrive in 3-4 weeks so hopefully I will have a miracle solution in about a month. (I won't be surprised if it turns into another ornament though.) 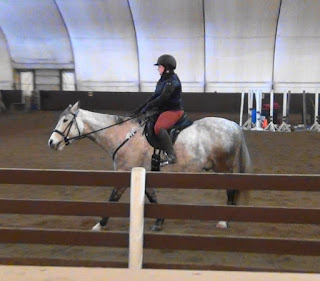 Has anyone out there in blogland tried this bit before?