I came into an inheritance a few years ago. Not enough money to buy a house or retire from my job, but enough that I could do something with it that I would otherwise have to save up for many years to be able to do. At that time I was borrowing a friends trailer to head out for lessons, which I wasn't real comfortable about. So I decided that I wanted a trailer of my own.

I knew that I wanted a straight haul. I figure that I would be trailering a lot by myself and that it would be easier to teach a horse to self-load in a straight haul versus an angle haul. I don't like step-ups - maybe it's because I'm short and they often come up to my knees. So I wanted a ramp. And it had to be a bumper pull.

I live in the land of angle-hauls, and there weren't too many options easily available within my province. I was originally looking at Hawk trailers, partly based on their reputation. At the time the Canadian dollar was good and I was considering importing one from the US.

The plan was that I would borrow my dad's truck for the next few years until I had to replace my SUV. Unfortunately, when I started looking at the specs for his truck, it doesn't have the towing capacity that I would need for a Hawk trailer. Well, crap.

So I started looking at my options. I remembered seeing the Brenderup ads in my many years of Practical Horseman magazines. Unfortunately they were no longer being brought into North America. But a similar style of European trailer by Böckmann were available, even in Canada.
The only dealer in Canada was too far away for me to see the trailers in person, so I scoured the internet to find out everything I could about them. Which model would I want? Which features? And most importantly - which colour?

I considered two models - the Master and the Portax. The Master series is made of PRP (polyester reinforced plywood), and the Portax is made of anodized aluminum, which only comes in silver (but you can get coloured fiberglass accents). The Portax had a front unload option, which was attractive. But in the end I went with a Big Master, primarily because to access the tack area in the Portax you had to go back inside the trailer. (They have since changed the tack area and you no longer have to do so.)
I wanted it in navy blue. So I had to wait about 4 months for the trailer to arrive from Germany. That timing actually worked out perfectly as my parents were driving across the country so they were able to bring it back for me.

This trailer is fine piece of German engineering.

First, the shape. It looks like a little spaceship. It pulls beautifully behind the not-overly-powerful truck. The dealer was telling me about a video she saw when she visited the factory. The video showed the trailer in some sort of wind tunnel, and they put some smoke or something in the trailer so that they could see the airflow inside the trailer to determine the best positioning of the windows. I doubt any of the standard North American trailer companies have done that.

It's quite inviting for the horse. The interior is a nice bright white, they can see out the windows, and there is lots of head space in the Big Master (one of the reasons I chose the Big Master over the regular Master). Standard interior height is 7'7".
Should a horse decide to be silly while on the trailer and either get over the chest bar or under the butt bar, you can release them from a safe position outside the trailer. Put the handle of the broom that comes with the trailer through the rings that you tie to outside, unscrew them, and the plate on the inside that secures the bar releases, and the bar falls, thus untrapping the horse.

The ramp moves easily up and down and has ridges going across the width and the edges so that the horse doesn't slip. On the sides, there are notches in the ridge so that liquid can drain - either from cleaning it, or when your horse pees on the ramp while loading (Phantom!). Just remember not to have your foot under it!
The tack room is quite spacious. I can jam a lot of stuff in there. I wish it had more hooks - I put some 3M Magic Hooks up with various degrees of success at them sticking long term. If I was braver/knew what I was doing/had the right equipment I'm sure that more could be added.  It came with a rubber broom with a telescoping handle and a small shovel. I prefer a fork to pick poop since I use shavings for bedding so I added a small fork with a telescoping handle. The tack room is accessible from the outside driver's side, and the interior passenger side, though you couldn't get the saddle out from there.
I added the metal grid head divider. It can be removed if I wanted to. Böckmann is like Ikea - most of the hinges and brackets can be tightened with the included allen key, that has a home on the inside of the tack room door.
Probably the only other thing that isn't my favourite about the trailer is the pull down canopy over the ramp. These are very common in every country outside of North America. It's nice in that it gives you the option to leave it open for ventilation, or fold up the bottom part so expose the screen. I have to hop on on the step when I pull it down, which is only a little bit awkward - so far I haven't fallen off the step.
My favourite extra that I added is the flip-down mounting step. I saw that in the catalogue and needed it. It was a $400 option, but it's a pretty sweet for a vertically challenged person.

The coupler has a built-in lock so that I can lock it onto the hitch when towing, or when it's unhitched I can put a ball thing that it came with into the coupler and lock it so that no one can hook a truck up to it. The coupler has some swivel in it that makes hitching up easier, and it kind of grabs the ball. Don't stick your fingers up there or they might get caught! 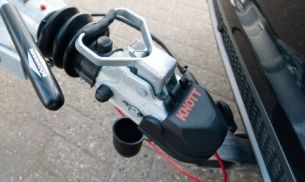 In Europe they don't drive pickup trucks like we do in North American. So trailers are engineered to be driven behind SUV's or larger cars. They can only put a maximum of 4% of the trailer weight on the hitch of the tow vehicle, versus the North American standard of 10%+.  They also use a different braking system - instead of electric brakes that activate when the brakes of tow vehicle are deployed, they use surge brakes instead. Basically, there are hydrolaulics that go from the tongue of the trailer to the trailer brakes. As the trailers pushes into the vehicle, it activates the brakes, so that the trailer never actually pushes the vehicle. This explains it better.
Another reason that I chose the Big Master is because of the shock absorbing system. It has shocks similar to car shocks, so it gives a very smooth ride for the horses. There was a video online (that I can't find anymore) of a table wth a glass of water in the back of a standard trailer (European style) and then in a Böckmann with their WCF shock system. The difference in the way that the water danced around was incredible - in the Böckmann it barely moved until they went over train tracks, at which point it danced a bit (in the other trailer the glass fell off the table).
I credit the smooth ride to Phantom quickly becoming self-loading and a relaxed traveller, something that she wasn't in the trailer I was borrowing.

I won't deny that part of me wishes that I had a dressing room. But that is probably the only reqret that I have with this trailer. The PRP should continue to look good for a long time, so there is a good chance that this might be the only trailer I ever own. Unless I pick up a third horse..... (um, no.)

If you want more information about these trailers, visit the Böckmann website, or contact Marsha at Maple Lane Equestrian Trailers in Ontario, Canada.