Due to work and an abnormal heat wave (30 degrees in May? We still had snow a month ago!) I hadn't ridden since Monday. I've learned that Cisco doesn't really need to be lunged after a few days off so when I tacked him up on Saturday evening after he had 4 days off I left the lunging equipment in the barn.

I started on the ground exercise that I had done with Cisco on Wednesday. He has the idea of moving his butt towards me, but isn't overly engaged enough with me to do it quickly. But he remained super quiet. and this carried over to the mounting block, where he was so much better than he has been the last couple of weeks. He stood quietly, without fussing with his mouth, and I was able to get on fairly quickly.

From there he walked around on a long(ish) rein with a nice relaxed pace, which scored a 6 for regularity by the Equisense. I hoped that the relaxation would carry over to the trot - and for the first time, it did! Right from the beginning we were able to trot on a long(ish) rein with a regulated pace. Sure, there were some momentary blips where he sped up a bit, and I would shorten my reins a bit in the scary end just in case, but I was really happy with the ride.
Of course, some new problem had to pop up. The problem du jour is that he bulged his right shoulder to the inside really badly when I asked for a trot transition. I think it's partly me - I think I ask for trot a bit stronger with my left leg, and the left leg is the one that he moves better off of laterally. I also need to get him a bit sharper off my leg for the trot transition. He's really inconsistent as to how much leg it takes to get a trot - sometimes it's a good nudge with heels, and other times it's just a whisper of my calf. Having him react faster will help with staying straighter through the transition.

I hoped that the good ride streak would continue for Sunday's ride. He was a bit more up when we were getting ready than the day before (a horse was getting loaded onto a trailer at the end of the barn, and a couple of horses were screaming at each other across the yard) so I didn't have high hopes. I started the same as the day before with the groundwork - this time in different places in the arena. Again, he has the idea of what to do, he's just not in a rush to do it.

When we got to the mounting block, he wasn't quite as good as the day before. There was a horse getting bathed outside the barn behind him, how could I expect him to stand facing away from that? He had to circle the block once before coming back to the front, and then we got to test the groundwork we have been working on. I tap tap tapped, and he (eventually) swung his butt around to stand parallel to the mounting block. Then stood rock solid while I got on, and waited until I asked him to walk away (while he stared at the showering horse behind him). Success!

He started off nice and relaxed just like the day before. So after a few minutes of trotting on a light contact, I decided to mess up that relaxation and head outside to the outdoor arena for our first real ride outside. 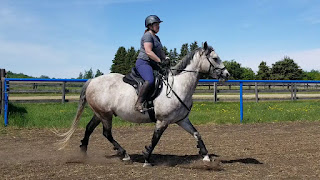 We've gone for a few cool-out walks around the yard, but we've never done anything that involved intentional steering and going faster than a walk. The barn that I board at doesn't have an outdoor arena, but the neighbour does, and we can pay $35 per month to use their facilities, which also include trails and an obstacle course. I sent them money last week, so now I need to make sure I get my money's worth!
My hopes were that we would be able to trot around with steering, Ideally at a pace I chose and on a light contact. And no spooking/splatting/scooting at the horses in the pens around the ring. The ride went about as well as I could have hoped for a first ride outside!
Yes, he was a bit bulgey towards the horses at the far end as we cut across the center of the arena. And yes, he slowed his trot down as we passed them. All relatively minor things that will be easy to work on. 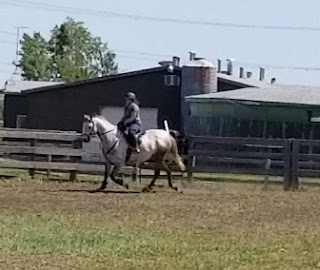 I'm super happy with how the progress has been going over the last few rides. Now to get going on the canter!