It was stinking hot here last week - 30 degrees Celsius. I really dislike the heat. When it's hot I just want to hide in the house with the air conditioner on, watching Netflix and wearing as little as possible for clothing. So I thought that the ponies might enjoy some frozen treats. And Cisco's birthday was coming up, so that was a good enough excuse.

They both live in a pasture with other horses, so it would have to be made in something they could eat inside, which ruled out the hanging popsicles. And it would have to fit in my freezer and be transportable. So I picked up a couple of snack-size rubber tubs.  Then - what to put in it? Miss Picky likes some odd things, but she's fairly traditional when it comes to fruit. I still haven't figured out Cisco too much yet. So I stuck with apple, carrots and tossed in a banana. I actually bought 1 apple and 1 banana at the grocery store (and 2 boxes of cookies for me -they were on sale!). I had some apple juice that had a best before date of last fall, and I figured the ponies wouldn't complain.

Veggies got chopped up with a mix of apple juice and water. A couple of days in the freezer and I was ready to take them out to the barn. I brought both horses in together for the first time and it wasn't the gong show I was expecting. I was worried that Phantom would be pissy about him being within her bubble, but she seemed perfectly fine. What was more of a problem, and I didn't even think of it until we started walking, is that he is Speedy Gonzales and she is a turtle. So I was dragging one behind me on my left and trying to slow down the one on my right. But we made it in without incident. 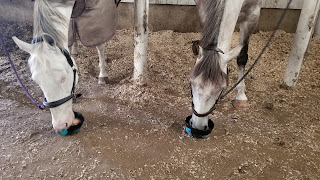 The pony popsicles were a solid hit! They were licked and chomped, then Cisco stuck his foot in his and flipped it over, so I put the pieces in a bigger dish and he chomped them down faster. Phantom is always a slow eater so she took longer in eating hers. They both didn't finish their dish, I guess they were a bit too much for both of them. The other horse that was getting groomed was only too happy to finish the leftovers.

And no signs of brain freeze were shown.

Email ThisBlogThis!Share to TwitterShare to FacebookShare to Pinterest
Labels: treats