I had an interesting ride on Cisco last night. Not bad, just interesting.

The quick set-up - one of the trainers at the barn has a working student for the summer who is living in a camper trailer that is set up behind the arena. Of course, behind the scary end of the arena. It hasn't caused any problems for the last couple of weeks, but this evening when we entered the arena, there was a bit of a party going on (not really, I'm sure they were doing something useful). There were lots of voices and noises emanating from the other side of the wall in the scary end.

Cisco is always wary of that end of the arena when he is in there by himself, but as of late he has a good look on our first lap in each direction and after that is pretty good about it.

Last night, he was a bit more concerned because of the odd noises, but was going into the end without too much issue.

And then the rabbits showed up.

Not literally. There are far too many dogs running around this place for rabbits to think it would be a good idea to hop on in.

Have you ever heard Warwick Schiller's 13 Rabbits story regarding stacking stress?

“I was at a clinic and had a participant say to me, “My horse is completely stupid!”  When I asked why, she said:

After reassuring the person that her horse was not stupid, Warwick explained it to her this way: What happened was that when the horse saw the 1st rabbit, it caused a little bit of worry and the horse held onto that worry.  When he saw the 2nd rabbit, it caused a little bit more worry and he held on to that as well and so on and so forth.  After the 12th rabbit, the horse had accumulated a lot of worry.  Once that 13th rabbit came out, the horse could handle no more worry and the horse freaked out.  So, this horse could not handle more than 12 rabbits worth of worry! 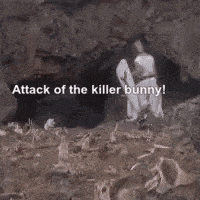 He handled the voices and sounds at the beginning of the ride quite well. Then, while we were still walking in our warm-up, as we were heading into the scary end down the center line, there was a different sound - kind of like someone had shaken a blanket and it made that thunky snapping sound. Cisco was very concerned about that sound. He stopped dead, and we had to turn to the right away from that sound to get going again. He was good though, he didn't try to spin or gtfo from that end.

Then one of the trainer's bulldogs came into the arena from that end. Cisco usually doesn't worry about the dogs, but again, he had a bit of extra concern.

Next, he spooked a bit at the jump blocks that live on the other side of the fence, nowhere near the scary end. This was very out of character for him.

Throughout this, we kept walking through the scary end, without putting additional pressure on him. And he was very good and kept going without stopping, but would have a good look into the end every time.

He put up a brave face, so I was a bit surprised when we picked up a trot at how much tension there was in him. He normally starts the trot as a bit of a llama, but this was much more of a drama llama than usual.

We stayed in the "safe" zone until he started to relax, then started to work towards getting into the scary end. I kept it simple - trot down the long side until I felt him start to worry, then back to walk, walk through the short side, wait until he was settled coming out of the corner, and repeat. We were generally able to get a little further into the end before walking with every pass, but if we changed direction or did a bit of work in the safe end we kind of had to start over again.

What I found really interesting about this ride was that I could really see the rabbits adding up. In the past, when he's been stressed about something he's mostly stayed at the same heightened level for a while and had a hard time letting go of it. On this ride, he didn't outwardly show the amount of concern that he obviously had and was trying really hard to just keep going forward into the corner, but would have a moment of "I'm really worried", gave it a try, and seemed to take that breath after the corner and think "it's okay".

I thought this was a pretty big deal for my very much not-brave horse. The amount of try was huge. Other than the one time when the blanket shaking sound was heard, every other time he took me into the scary end, he might have had a couple of wobbly steps, but he kept going. This is the kind of ride where I realize how far he's come from when I started him.

Hopefully, this ride eased some of his leporiphobia (look it up), and next time it happens he'll see mini lops instead of Giant Flemish's.