For the first time in a very long time, Cisco was ridden five days in a row this week. We are still BFF's, as on day four he galloped across the paddock to meet me at the gate when I called him. Mind you, he didn't even look at me on day five when I went out to catch him, but I'm pretty sure that was because it was pouring rain and he wasn't inclined to leave the shelter.

On Wednesday night, I had called Pony Grandma (aka my mom) to see if she would be able to come out with me on Thursday and help me with something. I have been wanting to try using the Surefoot Pads with Cisco while under saddle, but there never seems to be anyone around to put the pads under his feet for me while I'm riding.

At some point on Thursday, this video link popped up somewhere on the interweb for me, and it seemed fate that I had already planned something similar for that night. There's some really good info in this video.

Pony Grandma (PG) hasn't been out to the barn since last summer. This wasn't the best ride to show her the progress that we've made - I wasn't riding my best, and thus Cisco wasn't really going his best - but she saw a huge difference in his relaxation as we warmed up.

Cisco was inclined to go in a long, low frame on this day, something that we've often struggled with. The challenge is always keeping his nose out. He was doing pretty good with it though.

After some w/t/c, we started with the pads.

Cisco has done them many times before, so he is very familiar with them, and generally made it very easy for PG to place them under his feet. However, he wasn't as inclined to stand on them as long as he normally would, which I assume is because this time he had the extra weight and balance of his rider. Still, I was able to feel him do some twitches, sways, and little body adjustments while standing on the pads.

Did I notice a difference in him after standing on the pads? An assured yes! 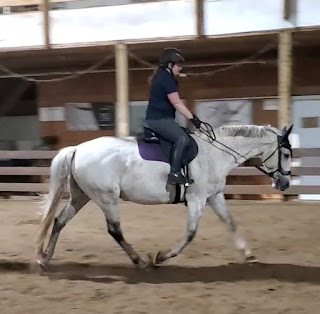 It didn't take long for him to do so at a walk. And after a while, he let me know that he wasn't wanting to let me bring his head up as when I tried to shorten my reins a bit before picking up a trot he kind of snatched them out of my hand to continue stretching down.

The trot took a little bit longer for him to relax into, and surprisingly he was more inclined to do it on the left rein versus the right rein. I tried really hard to let him have a loose rein, and then we couldn't seem to steer at all, and when I would have to take a bit of contact to guide him in the direction we needed to go he went behind the bit, but popped his nose out again when I released. He felt soft in his body and light in his step.

Also of interest, was that in the beginning he really tried to take me back to the middle of the circle where the pads were lying on the ground, and where PG was standing. This didn't help our steering issues!

All in all, it was an excellent experiment that I will for sure be repeating. Cisco has been working really well lately but he has a tendency to get a bit stuck and short in his neck. He also still needs to develop the muscles along the top of his neck, especially in front of the withers. They're coming, but slowly.

I just need a person ready to pop the pads under his feet at different times of my ride so that I can use them to release tension through the ride. That should be easy, right?