What has Phantom been up to lately?

Well, she got her teeth done last month. Now that she's 19 I'll have to get it done every year. She typically was always good at her one-year check for "another 6 months", and then by the time I actually got it done it was usually closer to two years.

With the current price of gas, instead of hauling her over to the vet clinic to be done (which was always a half-day activity) I joined in on a barn appointment with a new-to-me vet who only does teeth. He is a bonafide horse vet, he decided many years ago to specialize in dental work so I believe that is all he does.

He didn't quite heed my warning that Phantom was not a cheap drunk for this procedure, so before he actually managed to get a float to touch a tooth she required two top-ups from the initial dose of sedation. And even then, she fought through the sedative. He was actually quite impressed by her willpower. 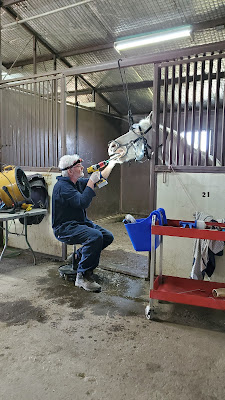 But, the job got done, and she's good for another year. There were no major issues, just a couple of sharp edges.

Also - did you know that after the age of 25 horses should get their teeth checked every 6 months? As they get older they get spaces between their teeth and food will get stuck in there and cause problems.

The other issue that we've been dealing with is her fecal water syndrome problem. It wasn't too bad over the winter, but it's come back. I suspect that it's mostly due to a difference in the hay - the hay over the winter was much grassier, the stuff they are on now is a bit coarser.

It also means trying to get some psyllium into her. Which has been a bit more of a challenge than it was last year as she has not been eating her beet pulp/grain mixture very well. I've completely eliminated giving her the ration balancer she's been eating for the last 4 or 5 years as she was turning her nose up at that and have dropped her down to just some beet pulp. I suspect that it's due to being on Prascend for her Cushings - inappetence is a common side effect. She's eating hay like a champ so I'm not too stressed about it, and Cisco has been excited to keep getting second suppers when he gets to finish off whatever Phantom doesn't eat. I'm mostly concerned that should she lose weight I'll have a hard time getting some extra calories into her.

Under saddle, she's been feeling pretty good. I started her on a daily dose of Previcox and she seems to be more comfortable on her hocks. She's still on her forehand much more than she used to be, but she also doesn't get ridden enough to be strong enough to carry herself the way she used to.

I rode her on Tuesday and she felt amazing - especially her right lead canter. It was uphill and relaxed and I could have ridden it for miles. (Not really - I would have died after the first mile.) Thursday's ride - we couldn't get that feeling again. We just kind of do whatever she is feeling good about doing - some rides we canter, some we don't, and some we barely get out of walk. Since she's been given the regular Previcox dose, she's been feeling good pretty on the regular.

One other possibly not great thing has popped up - I might have found her first melanoma.

A couple of days before she had her teeth done I discovered a pea-sized and shaped lump in her chin groove. I asked the dental vet to have a feel of it and if it is something I need to get investigated. He didn't flat out say it was or it wasn't, more keep an eye on it, if it grows get it checked out, or have my regular vet have a look at it when Phantom sees them next. The good news is that it seems to not be attached to anything except skin. The vet was more at her age and as long as it doesn't start growing quickly, don't stress about it.

Of course, I'll totally stress about it!

(Sorry if the post title is a little click-baity - I was having a hard time thinking of a title and liked the alliteration.)