The Secret to Horse Training

I have found the magical piece of equipment that has turned Cisco into a fancy prancing horse!!!

I wanted to try it for a long time and finally found a cheap one that made it worthwhile to see if it would work. I spent a whole $12 on this magikal, prancing unicorn-making device.

What is this revolutionary product that must be made of fairy dust and the tears of middle-aged amateur horse-owning women?

Are you ready for this? Can you contain your excitement??

Here is my secret: 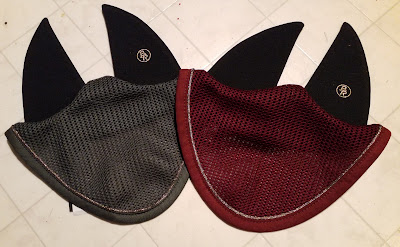 Cisco is so much better in this bonnet. He can concentrate so much more, and because he's not worried about something going on around him (like a pigeon that might potentially flap up unexpectedly somewhere in the ring) he's gotten steadier and more consistent. I think he's only spooked maybe three times since he started wearing it, and they weren't scoot spooks, more of a plant a leg quickly for a step kind of spooks. Huge difference.

I know, I know, it could all be a coincidence - he had a chiro adjustment last month (another one this week), most of our rides have been with other horses in the arena, and I've been working on some basics that he should have by now but he apparently picks and chooses as to when thinks he has to do them.

But the few times that we have been by ourselves in the arena or someone has left partway through our ride, or when the murder door opened up at the end of the arena and horses disappeared through it never to be seen again, he's mostly just glanced at it and gone back to work with nary a hissy fit.

I managed to get the Pixio mostly working this past Sunday, which turned out to be a ride I was really happy with.

Cisco noticed the mirror panels that have been placed behind the kickwall during some renovations and his vanity kicked in.
Right from the beginning of the ride he was really relaxed and waiting for me. One of the things I've been really reinforcing is going into the corners of the arena - he prefers to drop the shoulder, ignore my inside leg, and cut the corners early. So we've spent a lot of time riding straight into the corners and halting - even the scary ones. It's definitely gotten way better, and it's helped with the spookiness in the end - if he's not thinking gtfo as we approach the corner, his reaction when something spooks him isn't nearly as big (not that he's spooked since he started wearing the bonnet). This was the first ride that when we approached the first corner at a walk on a loose rein, he went straight into the corner and stopped like he knew that that was his job. It was even the scariest corner in the ring! We warmed up at the trot stopping in the corners, ideally with no hand, and he stayed straight and waited.
Ignore the western trainer and lesson that decided to work right in front of my camera. There should be no sound so that you don't have to hear him. And hopefully, you can see me behind the round pen (super annoying and it better only be up for another week as we were told). The gate in the second corner was wide open so I had to use some hand to stop him there or he would have happily trotted through it.
Another thing that I've been working on is a forward, relaxed pace. When Cisco is worried he can be a little overreactive and quite wiggly. When there are other horses with him and he's chill he's behind my leg. Lately, he's been chill most of the time so I've had to get him sharper off my leg. Turns out he's actually pretty sharp off my bodyweight for going forward, but I need him to be sharper to the leg if we want to jump.
On this ride I really liked how he felt - just the right forward, relaxed, and, dare I say it, steady. He's never been a horse I would apply steady to.

Canter was much the same - relaxed, trying hard to stay in a relaxed frame, and we had some lovely forward and backs within the canter, including on his harder left side where he usually gives up because it's hard.

This was a ride where he did what I asked so I kept it short. It wasn't perfect by any means (like our ugly, sticky canter transitions) by I'm trying really hard to reward the try, and on this day I thought he tried really hard.

The rest of the week hasn't worked out to ride - Cisco had a chiro appointment on Monday and was told to take Tuesday off. I booked a massage for myself later on Monday, which originally felt great, but after being up for 20 minutes the next morning I made the fatal error of looking down at my phone, which tweaked something in my neck and I couldn't turn my head to the left - 10 minutes before I had to drive to work. Shoulder checking was awkward. I decided it would be smart to not ride for a couple of days, it's much better today (Thursday), but there's a clinic booked in the arena this weekend and the arena won't be free until late evenings (which actually might work out ok for me). I have to work ridiculously early on Friday so I think if I go home and have a nap in the afternoon and then have supper before heading out to the barn I can make it work. I'll make sure I put on Cisco's magic hat!