The clinic that had booked the arena continued on Sunday until mid-afternoon. Originally the day was looking beautiful and sunny and perfect to go for a ride out somewhere. That changed significantly by the time the day arrived. 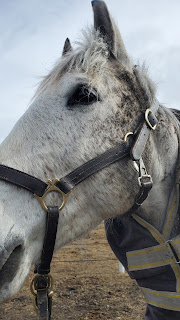 Both horses were lying down when I went out to get them. They were both using dirt pillows. 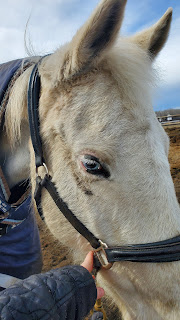 Instead, we had extremely high wind warnings, rain, snow, and a big drop in temperature. The good news was that it wasn't going to happen until late afternoon, so despite me parking my butt on the couch and starting a new farm on Stardew Valley I still made it out to the barn with time to do something sort of useful with the ponies.

A couple of weeks ago, I was being lazy and doing some internet surfing. Someone had reviewed Equibands, which I've been interested in trying. That led me down the rabbit hole of more videos and reviews, and when I read that it was supposed to be good for wiggly horses, my brain responded with "my horse is wiggly take my money please".

And then somehow a set magically showed up in the mail a week later.

Don't you hate it when that happens?

It was honestly an impulse buy that I kind of immediately regretted. Even more so the next day when I got a response from the company about the difference in sizes and they said I should go with the regular size - I had ordered small.

I ordered the small mostly because the regular is on backorder everywhere due to Covid. The small was immediately available. The size chart says that the regular is recommended for horses over 14.2hh - Cisco is just over 15 so it wasn't a huge difference, and he's relatively compact. The dimensions of the saddle pad are the same if not bigger than the saddle pads that I currently use so it would fit my saddle.

However, the response from the company said that a saddle pad that is too small would not place the band in the appropriate location - it could slide forward. Thus I started having doubts about my choice, just as I got my shipping notice. D'oh! Too late to make any changes.

Reality is, I think it's fine. Based on the pictures I've seen it's not a hard and set rule as to where the abdominal band has to sit - the general area will work just fine. I honestly would be more concerned with the larger size and think that the band would squish backward on Cisco as that is where his very round tummy starts to narrow and taper. I'm pretty sure he wouldn't appreciate that in his junk.

The recommendation is that you handwalk the horse the first time that they wear it to make sure there aren't any explosions. Sunday was the perfect day to finally do so.

Cisco didn't seem to care too much about the band around his stomach. I probably still need to tighten it more, but I was in a bit of a rush to make sure I could be done before the storm started. I have to figure out the whole 50% less tension in the rubber band thing.

Did I notice a difference on his first wearing of it? Maybe.

He walked slowly. Which is not really a Cisco thing. He usually tries to take me for a walk,

In fact, at one point, Phantom, who was also walking with us, and who is a confirmed slow walker, was well ahead of Cisco. That's almost unheard of.

Was he slow because he was having to work a bit harder? Don't know yet.

I'm going to try to use it under saddle this week. I'm hoping for a horse that will become straighter, push more into the connection, and use his left hind a bit more. We'll see over the next couple of months!