A little over a year ago, my ride on Friday would have been terrible.

Cisco hadn't been ridden for a week. There was some fence construction (de-construction?) happening outside the arena and there was a whole lotta power tool noise. Horses were starting to arrive for a clinic that started the next day. The PA system for said clinic was set up but covered in black garbage bags. The letter B was only held on by a corner and thus was flapping in the breeze halfway down the long side. Two of the clinic horses suddenly showed up at the wrong end of the arena without warning.

Sure, he looked at the PA system the first time we walked past it. And on about the 20th time we passed that flappy B he dropped his shoulder to the inside. But that was it.

I thought I might be in trouble as I was warming up. He called out a couple of times and there were a lot of snorts as we walked around the arena - usually the harbinger of a rushed first trot. But not on this ride.

His new Turtle-Top bit has made a huge difference in how he's been going. He's much rounder at a trot right at the beginning of the ride. I have to keep encouraging him to lengthen his neck - it would be very easy for him to duck behind the vertical and hang out there, and I don't want him to learn that it's an option. 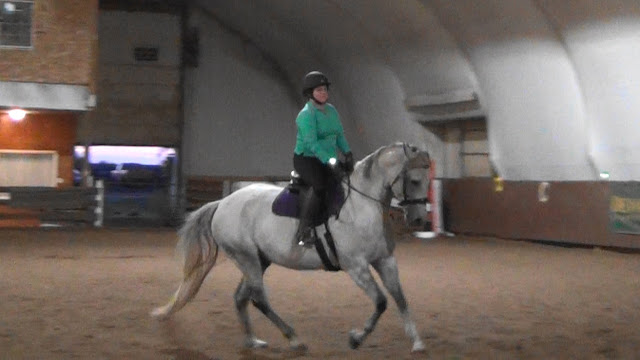 We've struggled a little with the connection at the canter since switching to this bit, but this was the first ride that he tried really hard to carry himself like I was asking. Again, he wants to shorten his neck, so I have to keep trying to get it longer. He got it for a few strides on his weaker lead and felt like he was really close on his good lead. I was really happy with his try. I think the longer neck will take a bit for him to find the strength and his balance. 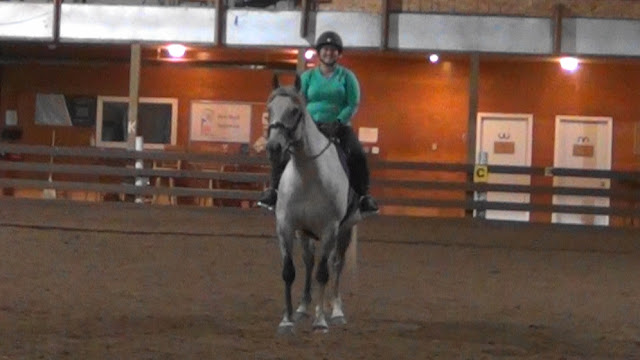