As soon as I hopped on Phantom on Monday night I knew she was feeling better.

She was pretty sassy. Maybe she was just happy to be inside and not out in the unexpected downpour of rain and wind that picked up just after I brought her in.

But I'm pretty sure it was because her hocks felt better.

She was far less stompy and heavy on her forehand at the walk. When we picked up the trot, her first few steps were slow and shuffly, but by about step six she was picking up her pace. A little too much pace. 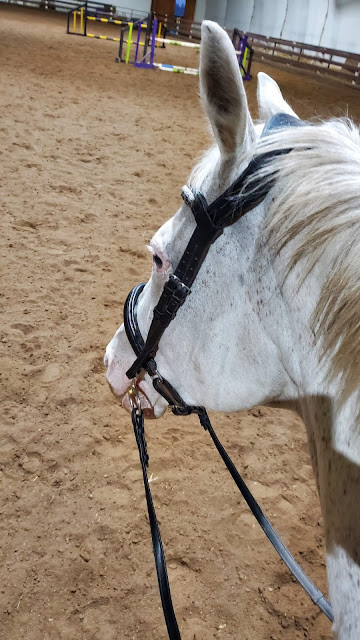 The whole ride really was just trying to keep her trot from getting silly. A little harder for me at the moment - I use a lot of thigh on her to half halt her and slow her down, but my left thigh is still sore (getting better slowly) and still hurts to squeeze in, so she wasn't responding as well as she would have if I could ride her better.

We didn't do a whole lot, a bit of walk/trot/canter, but because of the weather I took my time. On Saturday I had set up my Pixio determined to see if I can figure out a better setup as I've been having issues with it consistently losing me in one corner of the arena. I tried a couple of different configurations on foot and had a friend wear the tracker for a few minutes while she was riding and it all looked good so I was optimistic that I had found a better beacon setup.

On this night, I took my time getting it set up, and was really happy to find that it only lost me once at the beginning of the ride - in a different corner than normal. Success!

It's only been one week since her hock injections so hopefully she will start to feel even better over the next couple of weeks. Now the challenge will be to try to build some muscle again (on both of us) - I need my leg to get better faster so that I can ride more!