It Was a Crap Week

I haven't really been affected by the disaster that the year 2020 is turning out to be. Up until now, the worst was that I had my workweek cut down to 4 days for about six weeks, but because of a"danger pay" increase and being able to claim lieu or vacation days it didn't really affect my paycheques.

I could blame my pulled groin that has limited my riding over the last few months on the 2020 gods, but that would be pushing it.

Last week was a crap week though.

It started inauspiciously on Wednesday morning. I picked up a bagel at Canada's favourite chain of coffee shops on my way out to the barn - 4 cheese toasted with butter. Due to my medication, I couldn't eat it right away, so it sat wrapped on the seat next to me until I was halfway out to the barn on the highway. When I opened it I thought that the butter looked different today - yeah, it wasn't butter. It was something syrupy - maple syrup maybe? Whatever it was, it was inedible.

Since I was going to ride, I needed to eat. So I drove past the turnoff to the barn into the next town. The first two places I tried had drive-thru lines so long that I couldn't even get into the parking lot. Yes, I could have gone inside if there were any parking spots (there weren't at one place) but I was in a rush and pretty pissed at my morning. So I ended up with KFC at 11 o'clock in the morning.

I didn't have the best ride on Cisco, it was just an OK ride. I was in a rush because I had physiotherapy in the afternoon and was late getting to the barn due to the bagel fiasco. But I got there and everything worked out. 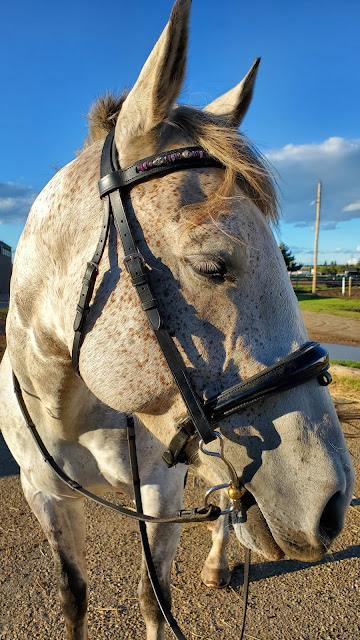 I also rode on Thursday and Friday. First time I've ridden three days in a row in a couple of months. Thursday was just a walk ride on Cisco around the yard. We haven't done much outside in a while because of the mosquitos in the evenings so it was a good break for him. He didn't lose his shit for once at the leopard appaloosa stallion that always runs the fence behind the trees when people ride down the driveway. He did go splat at a pigeon in the ditch that flapped up next to him and that really hurt my leg and I thought my ride might be done after only 2 minutes, but it got better and I wasn't really sore by the end.

On Friday evening I rode Phantom. She felt better than she did the previous ride, but I was a bit too sore to do much with her. We did a quick w/t/c and then headed outside for a walk. Still no bugs so she stayed happy. 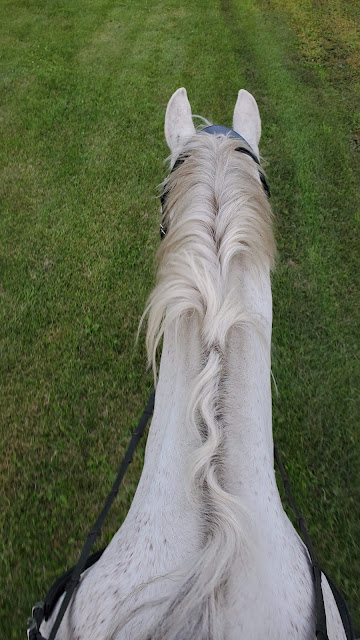 And then my car wouldn't start.

Thankfully someone who lives at the barn is a mechanic of some sort so he helped my jump start it and I got home without issue. But now it won't start again. I bought a battery charger and charged it, and have tried to jump start it with the same power pack that we used on Friday night. It won't turn over.

Thus my day off this week will be waiting for a tow truck to pull it out of my garage and take it to the shop.

I found out on Saturday that my right-hand person at work is leaving at the end of this week because she is moving to another province. We're just getting ready to head into our busy season. That's going to hurt.

I was telling her about how crappy my week was and joked at least no one has died. Then I remembered that one of the barn girls had just had a bad car accident (thankfully she walked away from it though) - she hit a deer on the highway and rolled her car three or four times. Her pretty well brand new car.

At least, the horses have been without issue through this week.

Sunday morning was cold and windy. I had to be out at the barn at 10 am to teach a lesson. I hadn't slept well (stress) and my stomach started bothering me. I had every intention of riding when I went out in the morning but when the time came I just wanted to go home and curl up on the couch.

I grabbed both horses and put them in the arena for a quick play.  Cisco really wanted to be silly but Phantom didn't - because she was lame.

Not real lame, but definitely there. She had a couple of stumbles on her left hind and seemed worse afterwards.

I fed them and went home. I was done.

Hopefully, getting my car towed isn't a pain in the ass and the repair isn't stupidly expensive, and Phantom's lameness is magically fixed the warmer weather of this week.

Also, it would be really nice if no one claimed the 14 million dollar 50/50 draw from my hockey team that it took them three weeks to actually draw because there was a huge clusterfuck from online ticket sales, and that they redrew the number and I won.

A girl can dream, right?