The arena that I ride in isn't really heated during the winters. There are radiant heaters in it, but they are really high so it takes forever for the heat to reach the surface. Not to mention that half of them don't work. (They are getting worked on.... slowly.)

Last fall I discovered a company in Alaska that makes riding skirts. And promptly sent a link to my mom with the message that she would be making one for me.

It was finally finished last week. And it's awesome.

We tried to copy the one that I had seen online from the pictures. I think my mom did an amazing job on it, though she's not happy with how the pockets are set in (the fabric is thick and she couldn't get it not to pucker at the bottom of the zipper). I'm not worried - it will be covered in slobber and hay soon enough and no one will notice.

We used a softshell fabric for the outside and lined it with a printed polar fleece. It's got some weight to it but I don't notice it once it's around my waist.

There is a 2-way zipper at the front. I unzip from the bottom when I'm in the saddle.

I wanted a velcro waist strap to allow for wearing different clothing underneath. My Kerrits fleece full seats are definitely thicker around my waist than my regular breeches and I wanted to be able to accommodate that. The waistband is actually a wee bit too big but it will work for this winter. In the summer we'll take it apart and make it smaller.

I can snap the front to the sides of my waist to make it easier to get on or to keep the skirt out of my way if I need to bend down. 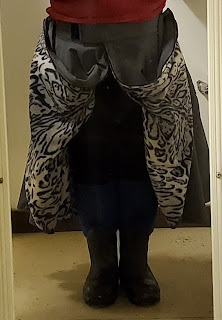 Because the skirt is so full, it drapes nicely in front of my legs and the saddle so there is no need for straps around my legs at this point. If I find that it flaps around we can add them later.

The cost for the material and supplies was about $150 - the fabric was on sale for 40-50% off. We used a poodle skirt pattern as the starting point, which called for 5 meters of fabric. Because I'm so short the skirt was shortened quite a bit and we had a fair amount of fabric leftover.

I chose a mid-calf length as I plan to wear it around the barn over my breeches when I go out to catch a horse or when standing in the arena teaching. Any longer than that and I felt it would get in my way.

I've ridden both Cisco and Phantom with it on. Neither horse had any concerns about it, though I played it smart and left it draped over the saddle while I mounted and then pulled it up around my waist just to be safe.

Both days that I rode in it were milder days, close to -5 celsius in the arena on Friday night and closer to 0 on Sunday. I had my regular Pikeur breeches and thin long johns on underneath it. My legs stayed nice and toasty. Almost too toasty in this mild weather (might need to also get an unlined one).

The skirt stayed where I put it when riding. Because it is so full it doesn't get pulled around as the horse moves. And since it stays in place I don't have to think about it and can just worry about my riding.

It might have flapped away from one leg at a canter for a couple of strides - I suddenly felt a cool draft on my leg. But it settled itself back into position while I was cantering so I don't really know what happened.

I am super happy with it.

If you live somewhere where the temperatures are below freezing for 5 - 6 months of the year, I would definitely consider getting one. The price to buy one from Arctic Horse would be a little over $300 Canadian (of course way less for the Americans). If you don't have someone who has the sewing skills to make it for you (for free) then I think this price is quite fair based on the cost of fabric and the required labour. It might seem a bit steep of a price, but if you use it for 30 rides a winter for 5 years, that works out to $2 per ride. And that isn't counting all the times you'll just throw it on to do chores or stand around in the arena chatting.

Not having thighs that take hours to thaw out after riding - totally worth it.