Since I've been using Phantom for a beginner rider that I teach, I've been thinking of trying her in a hackamore. She can be really protective of her mouth and doesn't like the reins being pulled back on or being used for balance. The young girl that is riding her is quite well balanced, so pulling on the reins hasn't been an issue yet and Phantom has remained happy. I'm just thinking a bit forward for when she's doing more (which will be a while as this rider needs things to go super slowly).

I own a short shank mechanical hackamore and an english jumping/sidepull noseband. I've used them both on Phantom in the past with no significant issues. But I can't find the english noseband (it's probably sitting right next to the breastplate, stirrup leathers and clippers I own but can't seem to find). So I had to buy another one.

After some research, I decided on the Zilco flower hackamore. It was said to be one that you can ride like it was a regular bit. I ordered it from someone in Britain on eBay, and about a month later it showed up. On Friday night I popped it onto a bridle and took Phantom for a spin with it.

Phantom went around happy as a clam. Forward, relaxed.

And totally on her forehand. 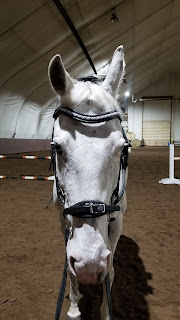 Forging at the trot. Dropped back. God awful canter.

I definitely won't be using it on a regular basis - I've no desire to encourage that way of going. And I don't think I'll use it for the lesson kid - Phantom didn't steer quite as well as I hoped with it. She was fine for me since I don't really use my hands to steer. But for someone who is learning to ride, she just kind of sets her neck straight and doesn't really bend so steering won't be as easy.

Some people can get horses working really well in a hackamore - I'm not one of them. Maybe it's because my legs aren't long enough to wrap under my horse to encourage them to engage their abs, or maybe it's because my horse isn't a purpose-bred dressage horse - stock horses tend to move very levelly. So if anybody has any ideas on how to encourage my horse to lift her back while using a hackamore that doesn't involve me growing an extra 8" of leg, I'm all ears!