The long awaited equestrian helmet safety rating study has been released. And there are some surprising results.

The independent study, done by researchers at Virginia Tech, put 40 helmets from multiple manufacturers through equestrian specific testing to determine their efficacy in preventing concussions and other head injuries. You can read about the new tests that they developed that are specific to the scenarios that equestrians encounter when they fall from their horses here. (Edited to add another link to a video about their testing process here.)

Helmets were given a numeric rating (lower is better) and ranked. And there are some very surprising results.

Two of the top three rated helmets are low-priced schooling helmets, the kind that most riders past the beginner weekly lesson stage of riding immediately overlook when helmet shopping. It's not a surprise that price had nothing to do with safety, but I think that these helmets tested so well is quite a shock to most people. 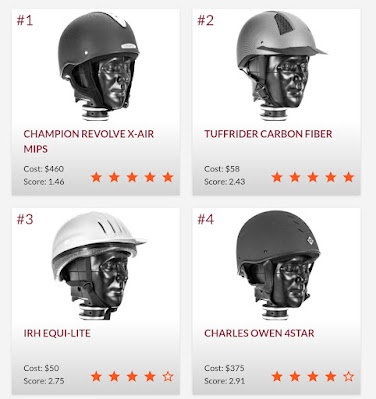 Also surprising is how low down the list most of the MIPS helmets are. Most of the Trauma Void MIPS helmets are in the top 10, and Uvex has a couple of models just outside at 11 and 12, but Charles Owen and Tipperary didn't fare well at all.

It will be really interesting to see the responses from the community over the next few weeks. What will the response from manufacturers be? Will they respect the results of the study and vow to do better, or will they claim that the study was flawed and their testing methodology is better? Will we see riders trade in the expensive blingy helmets for the plastic mushroom caps that scored so well? Will those inexpensive helmets now be seen as the cool kind to be seen in? Will the manufacturers of those schooling helmets look for the opportunity to run with these results and design these helmets to make them more appealing to riders who want a trendier look but also want the higher safety rating?

This study is definitely going to make me think about replacing my helmets. I mostly ride in a Troxel Avalon, which was not rated, but the Troxel helmets that were rated didn't do well, scoring in the worst 25% of helmets. My other helmet, a OneK Defender, also scored poorly in position #35 with one star. They are getting towards the end of their lives so I will start trying helmets on when the opportunities arise.

Finding a hemet that fits me is a bit of an issue though. Those inexpensive schooling helmets tend to be be round-shaped, and I've got an oval head (possibly even a long oval, though I've never been able to try that shape). It doesn't matter how well a helmet scored if you won't wear it because it doesn't fit and is uncomfortable.

What are your thoughts about the results of this study? Are you re-thinking the helmet that you currently wear?