I had a bit of an extended weekend off this weekend with great plans. Of course, I had to wake up on the first morning with migraine auras flashing in my vision, so trying to keep a headache at bay kind of wasted the first day.

There was a clinic booked for the arena on Saturday and Sunday this weekend. Nothing out of the ordinary was posted for Friday evening, but this clinician in the past has thrown in some private lessons on Friday night, plus the regular Friday night lessons were happening, so I went out a wee bit later than I would have liked just in case the arena was a zoo. Sure enough, there were two different lessons going on when I arrived, so I timed it perfectly. By the time I got in the ring, I had it all to myself.

Cisco wore his soundproof ear covers, so there were no ridiculous spooks, unlike the previous ride. In fact, for being by himself in the arena, he was actually really chill. We managed to have one of those elusive forward and relaxed rides - totally not what I was expecting, but I'll sure take it!

The only thing that was out of the ordinary was that he tripped behind a few times. Very unlike him. I couldn't figure out if it was one side in particular that had the issue or not. Post-ride I spent some time with him and the SureFoot pads to see if that was going to do anything for him. We're in the fantastic spring freeze/thaw cycle and there are frozen ruts all over the place, so maybe he took a wonky step at some point. I know I sure did while bringing a horse in that night - I stepped on a frozen tire rut in my softer soled riding boots and it felt like my foot folded lengthwise. It hurt for a bit.

The next night I planned on having a short, easy ride on Cisco, mostly to get him moving around a bit, but not be too concerned about forward just in case he was a bit uncomfortable behind.

I had taken my Pixio out and dragged Cisco along with me to set up before tacking up. As we were heading to the arena a horse had arrived and was stomping around a bit on the trailer. Well, Cisco lost his brain a bit with that. I had to stop the setup of the camera at one point and do a bunch of groundwork. Thus, I didn't have great expectations for my ride.

We didn't get into the scary end at all until half-way through the ride. Cisco had to have a good look for the horse murderers when we finally made it down there.

Luckily, I got saved. From there being no one around when I set up the camera, I ended up riding with 3 other horses in the arena. The hamster stayed asleep in Cisco's brain, which was good because there wasn't much space to ride with a full jump course set up for the next day's clinic and at one point two horses were being lunged where there was space around the jumps. Ugh.

The Pixio was being a bit of an arse, which combined with all the obstacles I had to dodge, didn't give me much usable footage. I got a bunch of crappy screenshots, but that's about it. 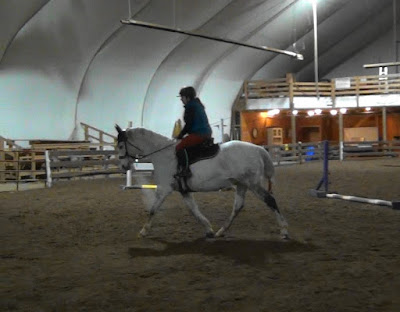 My ride on Phantom, however, was under much better circumstances. By the time I hopped on her at 9pm I had the place to myself again.

The old grey mare has felt pretty good the last couple of rides, which is especially great as they've been after I've ridden Cisco. I haven't been giving her any Previcox and have been quite happy with how she feels.

Our rides mostly consist of straight lines and big circles. Sometimes we canter, sometimes we don't. She gets to pick her frame and how round she wants to carry herself - she isn't the type to go like a llama. At this point, I just want to keep her moving.

She gave me a lovely right lead canter. I held the reins in a fillis rein style so that my arm followed her head a bit better, which resulted in her having a nice soft back and no bracing in her neck. The right is our mutually stronger lead, but the left one wasn't terrible either.

On top of it all, she actually stood still at the mounting block! This has been years in the making. When I first started riding her she would back up as soon as I got up the steps, and for quite a while I had to grab a whip to tap her forward before I got on. At some point, I realized that her reluctance to approach the mounting block or stand to let me on was linked with how comfortable she was in her body. When things weren't right, she would get sticky again on her approach to the block.

Lately, she's been really good about coming to the block, but standing once my leg has been swung over has been an ongoing battle (not that we actually battle about it.)

But on this night, she stood perfectly still for me to get on, while she was getting her cookie, and then let me faff about a bit - all without moving! At almost 19 years old, maybe we've finally got it figured out!