Oh What a Night

It all started really well.

I scraped a whole bunch of hair off of Cisco while getting ready for our ride. Spring has most definitely arrived! (Despite the snowstorm we had a couple of days ago.) 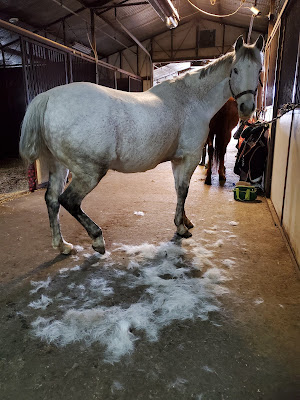 I've had a couple of really good rides lately on Cisco. On our last ride we even achieved the elusive forward and relaxed. Funny how getting a few rides in during the same week helps!

So I figured that I would leave Cisco's soundproof ear bonnet off for tonight's ride. I knew that there would be other horses in the arena with us, and also that the big overhead doors at both ends of the arena were open since it was finally warm(ish). These conditions made for a potentially laid-back pony.

And it all started as such. Cisco looked out the open door at the end and was chill about heading into the corners. He was once again forward and relaxed.

The first spook was at something he saw out the "safe" door. I saw a dog afterward, so maybe it ran past. We were walking and Cisco shot sideways at a canter. The instructor who was teaching a lesson was quite impressed with his movements.

He came back without issue and eventually we trotted into the other end, the normally scary end, but because the door was open, it was a much less scary end.

Until Cisco saw something outside that caused him to shoot sideways. And I was not ready for this one!

Somehow, I managed to stay on. I think it was because he went sideways, which caused me to lose my left stirrup and be way over to the right, but then he stopped for a second, so I was able to get back in the center of him again before he shot left once more. It was definitely the closest I've come to falling off of one of his spooks.

Since that didn't work to get me off, Cisco insisted on trying again. And again.

I've no idea what he saw that caused this reaction. The only thing I could see was the neighbour's horses, all happily standing and munching on hay. Although, one of them was a pinto, so maybe?? (Although Cisco's mom was a pinto and he lives with one.)

As I do have to work the next day and thus can't afford to die tonight, I mostly kept it safe and worked most of the time in the safe end of the arena.

He actually kept his cool and was a very good boy otherwise. We were ending the ride at a trot on a loose rein, with the plan to just do one more lap past the spooky area and hopefully not die, when one of the riders in the lesson fell off. And didn't bounce back up. Uh-oh.

An ambulance was called, so after tossing the horses into stalls I drove out to the road to direct them when they arrived. They were shortly followed by a fire truck, who was there to direct the air ambulance helicopter to land.

The good news is that apparently, a helicopter can land in the field next to the arena. It's actually a fairly large spot - I've seen them land in much smaller areas.

It sounds like the helicopter was ordered before the paramedics even arrived. We don't really know why, as even the paramedics said it was overkill. But hey, that's one of the benefits of our publicly funded healthcare!

The good news is that once the poor girl was on the ambulance and being treated it appears that her worst problem was going to be her elbow. She still got a free helicopter ride though.

Once the helicopter flew away the barn owner and I went out and checked all the horses to make sure no one had gone through a fence. Some of them were a little sketched out but all limbs were intact and no one was bleeding - except for the barn owner's horse. He had jumped into his neighboring paddock when the helicopter landed, which she did think to check on and wasn't surprised by (not his first time jumping a fence when stressed), but she didn't see the scrapes on his back leg until we checked on everyone.

It was definitely not the night I expected. The moral of the story is that Cisco will always get ridden with his soundproof bonnet on from now on. And that I will end up needing Advil should I choose to forgo it. (My back and neck are a wee bit sore at the moment. I'm sure not helped by standing in the cold watching the helicopter.)