I'm a little hungover on this first day of 2022. Not from an excess of alcohol by any means, but from my third Covid vaccination jab that I received yesterday. I woke up at 5 am with chills and achiness in all my problem areas. It's similar to how my body reacted for my first jab, but didn't pack nearly the same punch.

Thus, this first day of the new year is going to be pretty lazy, with plans to head out to the barn later in the day.

I spent my New Year's Eve out at the barn, all by myself (well, with the ponies). This was the first time in almost two months that I didn't have any time constraints and could spend time with the ponies, being silly, working on clicker training tricks, and in the beginning, just standing and hugging Cisco. It was lovely.

Unfortunately, it was also fucking freezing. We are in the midst of a cold snap that started before Christmas and looks to be around for at least another week. It was -24 celsius in the city when I left, but my car read -36 when I arrived a half-hour later at the barn. I was hoping to let the ponies into the arena for a run but it was way too cold. 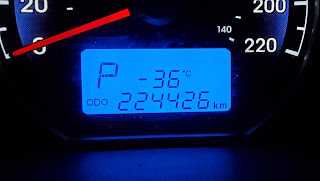 There is supposed to be a 24-hour reprieve from the crazy cold from Saturday night until some time on Sunday. If all goes well,  hope to hop on Cisco and go for a quick ride for the first time in over two months. I don't care if we only walk for 20 minutes, I just want to get on!