Guess what this is? 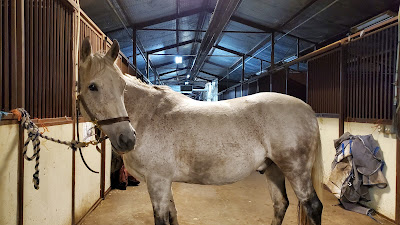 This is a horse who, for the first time ever, came off the trailer totally dry! No sweat at all!
The car rides are working!
Cisco was still a bit sticky about getting on. I schooled the loading before putting his travel buddy on, and that was definitely a good idea. Once he's been fully on once he's pretty good about being loaded and unloaded, the tricky part is just getting him to get past the half-way point.
I think this was also the first time that he partook of the hay net. Phantom is hit or miss as to if she eats from it. Tonight she started munching on it while I was loading Cisco. For whatever reason he decided to join in on chowing down, so I let them sit there for a few minutes before closing everything up and heading out. I was happy to see an empty net when we returned home and dropped hay on the floor in front of Cisco.
I truly didn't think he would get this much better this quickly. As of four car rides ago he came off soaked with sweat. To come off dry and happily munching hay is a huge improvement.
We still need to work towards traveling solo but I'll probably leave that until next year. I want to do a few more trips this year, maybe some longer drives, and try to get him getting into the trailer a little smoother. Hopefully his reduced stress will help with that.