Sunday brought yet another good ride on Cisco.
I'm going to have to do a year-end spook compilation video.
The other horse in the arena left before we picked up a trot so Cisco started his trot with a bit more enthusiasm than was required. I'm starting to insist that he keep his shit together in these instances. Keeping the pace that I desire is becoming a non-negotiable. I just need to figure out how to control his ability to throw his shoulders around. He's a very wiggly horse. 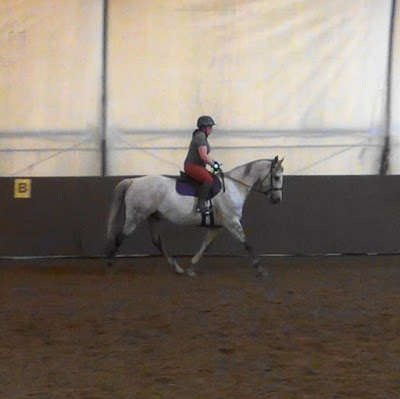 He was maybe a little bit steadier in the contact at a trot than he has been. Since changing to the Turtle-Top bit every ride has gotten better than the last one, so it seems to have been a good choice. His mouth is still busy, but I think I'm giving up on fixing that.
I'm working really hard at keeping his neck long and his nose out a bit. He's better at the start of the ride, after we have cantered he wants to get a bit behind the vertical. I'm wondering if it's a bit of a strength issue - he's a bit tired after some canter so he starts to cheat.
I'm off this week but the weather is not going to be conducive to do anything fun. We were hoping to head to the mountains for a day trip - Jasper National Park is about 3.5 - 4 hours away. But the highway in washed out last week, and although traffic is getting through, the delays are huge. My brother was already planning to go for the weekend so they drove out on Friday - it took them 7 hours to drive 20 km. We're definitely scrapping the plans for a day trip.
We've had a lot of rain this year, similar to last year. This resulted in poor quality hay in this area. Farmers were not able to get the hay off the field because it kept raining, the grass grew too long and got stressed, and the hay ended up with low nutritional value.
I've heard from multiple people that this was the first year that they've had to work to keep weight on their easy keepers. This is the first time in my life of horse ownership that I've had to put weight on my horses instead of worry that they're too fat! Both of my horses are currently at a good weight, but I've had to be very vigilant about it. We're all hoping to get better hay this year, but it isn't looking too promising.
at July 06, 2020