Walking Under Saddle For Rehab

I'm going to spend this week walking under saddle for rehab. For me, not the horses.

About three weeks ago I somehow strained the adductor muscles (aka. my groin) in my left thigh. No idea how - my ride the night before had been a laid back toodle, and I didn't feel anything until I got up in the morning. 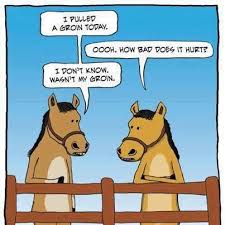 It doesn't bother me through my everyday activity other than being a bit sore when I wake up. And it mostly hasn't bothered me while I've been in the saddle.

Unless I ride both horses.

The last two Sundays I rode Cisco, then Phantom. Everything felt fine on the first horse. When I settled into the tack on the second horse, I felt a bit of pain in my thigh. On the first Sunday, I didn't feel it through the rest of the ride. On the second Sunday, I definitely did. It was painful enough that when I first picked up the trot I did about 3 strides before coming back to walk because it hurt. Of course, being a horse person, I stayed on and completed my ride (thankfully Phantom was feeling perky and I didn't have to use much leg).

I paid for riding two horses on both Sundays by being quite sore through the rest of the evening. Ice packs were applied and Advil was ingested. 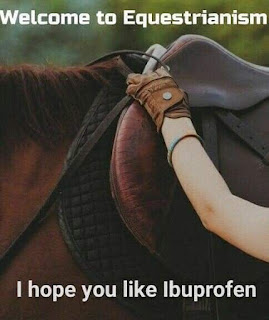 Thankfully I was no more sore than normal the next morning. But I don't want this to linger and take months to heal.

So this week I'm going to be smart(ish) and take it easy. When I ride I'm going to stick to walking. Mostly walking on a loose rein type of walking so that I don't have to use my leg. Squeezing in with my thigh hurts, so I probably shouldn't do that.
I'm hoping that taking it easy this week will mean that I can do something more next week when I'm off. I'll probably still avoid riding two horses on the same day, but hopefully I'll be able to do stuff faster than a walk.

Has anyone tried kinesiology tape and found that it helped with injuries?
at June 04, 2020