There's a Hole in Her Heel

On Thursday, Phantom, my drama queen of a horse, was pretty sure her leg was going to fall off.
I fed her when I brought her in before an intended ride. She's a right foot forward when eating horse, so her left hind needs to stay underneath her to keep her balance. She wouldn't keep that foot weighted on the floor. I found a strongish digital pulse but nothing else so I suspected an abscess might be brewing.
It's been really muddy for most of the last week. We keep getting pelted with bursts of rain. On that day it had poured rain for about an hour just before I arrived.

I buted her and threw her back out. Despite not wanting to stand in the barn with weight on her left hind, she was walking perfectly fine on it.
The next morning I went out early so that I could have a look at her and if I needed to call the vet hopefully avoid a weekend fee.
As I walked towards her paddock, she was picking at the grass, walking and standing on all four legs. When I got to the gate, she saw me, lifted her left hind to leave it resting kind of awkwardly, and gave me a nicker. As I said earlier - she's a total drama queen.
Otherwise, she was about the same. Walking without issue, resting it in the barn. Still a strong digital pulse.
Saturday I found a hole in her heel. 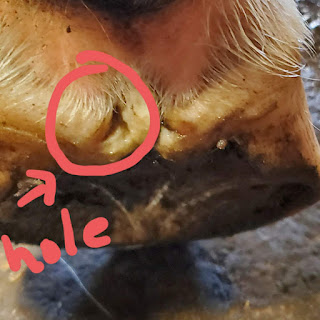 I'm still thinking that's it's an abscess. The cleft in the center of her heel has been pushed to the side and the hole is close to the center. I'm thinking that the pressure of the abscess pushed that cleft over. 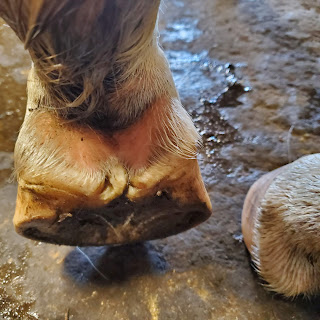 It was already wet from being outside in the mud. Ugh. Thus I didn't soak it. I flushed it with some betadine as best I could and wrapped it with some Animalintex. Not my best wrapping job as Phantom refused to unflex her fetlock. I tried to wrap up a bit higher than I might normally wrap to keep the mud out, but I'm not sure how well that will work.
Hopefully, it was indeed an abscess and she should be more comfortable in a few days. I'm also hoping that it stops raining. But that isn't looking so good.
at June 15, 2020