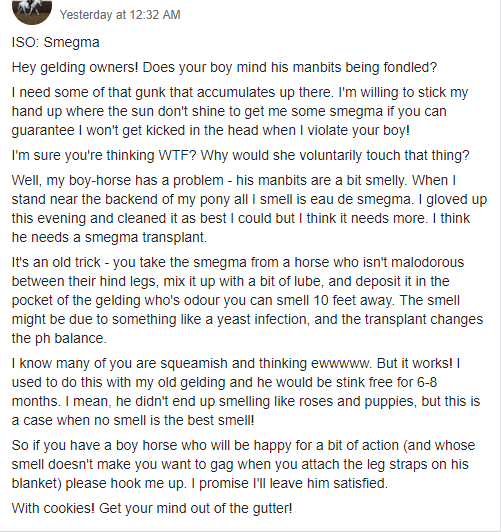 I posted this on my barn's Facebook page for the boarders.

I was too tired and crampy to ride on Friday night. It was still super smoky out, so I didn't want to do much with the horses. I hoped that when I arrived out at the barn in the evening that the Working Equitation clinic that was running over the weekend would have some of the Ease of Handling elements set up, and they did, so I played with some of the things in hand with each horse. But after that, what to do since I drove all that way?

I stood next to Cisco while pondering this question. And I caught the subtle scent of eau de smegma. Decision made.

I gloved up and grabbed the baby wipes and some warm water. And dug in. This was Cisco's first real time getting felt up so intensely - he had his sheath cleaned and the bean removed by the vet last summer when he was sedated for his teeth floating, and thus had dropped down. He wasn't going to drop down for me, so I had to get all up in there.

Thankfully he was a very good boy. My head is still its normal oval shape without any new dents.

His sheath actually wasn't overly dirty. It cleaned up pretty quickly. But that smell....

My old gelding, Farly, had a very similar scent that emanated from his sheath. His smegma was different than Cisco's - Farly had smegma that kind of looked like wet cat food. He would get a discharge on the inside of his gaskins sometimes, so one day I asked a vet what I could do about it. He suggested the smegma transplant trick. The idea is that the new smegma changes the ph in the recipient sheath as the odour is caused by something like yeast.

For Farly, it worked well for about 6 months at a time. He would stop rubbing his sides on his hindquarters, the discharge would go away, and I wouldn't detect any odour. The fun part was walking around asking for smegma!

So I'm going to try the same thing with Cisco. He's been rubbing his tail a lot, despite just being dewormed. I'm thinking the smell might be the giveaway that something isn't right in there. We'll see how it works! I've been offered a few geldings to violate as "willing" donors, so it looks like getting the material shouldn't be a problem!