Step Up to the Podium

The weather started to change on Friday night last week. Not much that night - the real temperature drop happened on Saturday. It was just enough that a person who was weary from the week and very much over this pending return to yet another winter didn't really want to do anything that would mean getting really cold. Which for me, would be tacking up and riding.

The fact that there was no one around didn't help. I just wasn't in the mood to have a crappy ride just before another week off. But I had a free arena, so I decided to take advantage of it, in the lowest effort on my part possible.

Cisco was popped in the ring first. It was probably a good decision to not ride as he was pretty sassy. We did some work with his mark to get him further down the arena, which worked until I got it past his comfort point around X. I don't know what set him off at that point, but he got a bit frantic and did that loud blow through his nose thing while staring at the end. Interestingly, once I moved the mat closer and got him to stop on it and he got his click/cookie, he settled right down and just walked the short end instead of the frantic trot/canter.

I had bigger plans though. I had dragged out the podium that someone had made a while ago and stored at the end of the ring.

I think I've tried the podium once with Cisco a couple of years ago, and if I recall, it didn't go so well. Also, because I'm a sucker for punishment, I had set the podium up quite close to one of the scary corners of the arena. (Mostly because it was too heavy to roll too far out of the corner where it is stored.)

Once we got the chill walk, we made our way down to the podium. Sure enough, he wiggled his way all around it without actually stepping on it, all the while keeping an eye out for the hiding horse murderers in the corners.

At one point I stepped up on and across the podium - that seemed to give him the idea that he could put his feet on it and he followed me across. Rather awkwardly though, as the podium is not quite wide enough for the horses to get their front feet and back feet on it at the same time, and the corners are cut off, so if they aren't totally straight, some limb ends up taking a step off the side while the opposite limb is on top.

Once he went over the first time, Cisco figured it out quite quickly. We went straight across a few times (well, not straight, more like drunkenly across), and then I started asking him to halt with just the front feet on. He seemed to start enjoying it, and happily led me to podium upon approach.

The main reason I had dragged the podium out was for Phantom. The last time I rode her I angled her a bit too much towards the lower step of the mounting block, which is what I first used when she first learned to stand on the podium, and she made an attempt to put her foot on it. She's always loved showing this trick off to me, and I wanted to give her something to do that she really liked.

Sure enough, she perked up on the approach to the podium, sniffed it, and immediately put her feet on it. And looked for her cookie.

What she didn't like, was walking across it. She was not impressed with that feeling at all.

She was never bad, or refused to do it though. She just took a bit to figure out to slow down and let me guide her straight.

At the end, I went back to having her stand with just her front feet on the podium. And I got a couple of my favourite ever pictures of her smiling for her cookie. 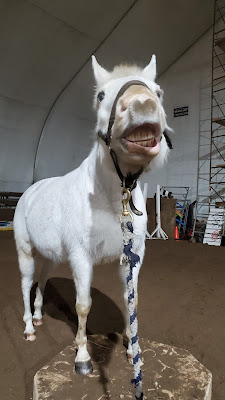 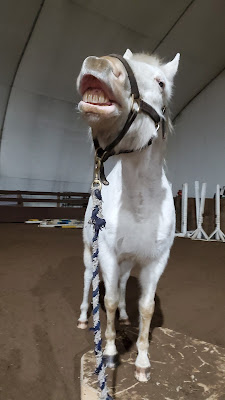 I need to see if I can Photoshop the background out of these and get them enlarged to put somewhere in my house where I'll see them every morning so that I can start my day with a smile.