Phantom had her hocks injected about 4 weeks ago at a vet exam where I said I suspected it was either her hocks that were sore and she was overloading her front end, or she was sore everywhere.

She definitely looked better after the vet appointment. Much less stompy on her front end. But she still didn't feel as good as I had hoped she would.

I've let her loose in the arena a couple of times recently to get rid of some energy and I really wasn't happy with how she looked. To me, it still looked like she was trying to unload her hind end, and there were a few transitions from canter to trot that looked like they stung (specifically on the left hind).

So this weekend I started her on some Previcox. I had gotten some at the vet appointment to have and see if it helped her over the colder months in the winter when she always seems to be stiffer.

Two days of Previcox and I rode on the third - Phantom felt fantastic. Probably the best she's felt in the last couple of years.

We had easy bend in both directions and she wasn't falling onto her left shoulder through turns. I braced for the downward canter/trot transition expecting it to be ugly but she stepped right underneath herself with her left hind.

I also had a whole lotta sassy speed to deal with. Girlfriend was feeling good!

I didn't do too much - she hasn't "worked" in a while and I don't want to tempt fate with her ending up sore somewhere else. Plus she just rides up and gets herself all wound up as I continue riding. With her, it's better to do some short rides until she's been ridden down enough to keep her brain from spinning.

So it looks like this might be the way we are going to go with her. Last week my vet had sent an email to follow-up with how Phantom is doing after her appointment so I finally replied back with how she felt on Previcox. I asked if I should be spending money to try to fully investigate where she feels sore (which could just be peeling back layers of an onion) or, if a daily dose of Previcox works, do we just go with it? That's what my inclination would be, especially knowing how much my horse dislikes being uncomfortable. I really don't want to have to inject all the things on her body. 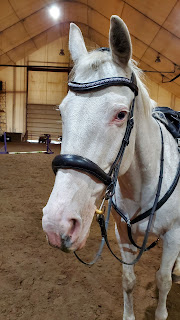 My homemade horse cookies work great as pill pockets. Break it in half, and it's soft enough inside to squish the pill in there and then squish the two halves back together to feed. I don't know if Phantom realized there was a pill in there - or she didn't care because it was encased in pony crack!

Hopefully, this continues past the first ride. It's always hard to tell when there is a bit of extra fuel injection propelling them forward!