It Was A Good Run

It was a good run, Cisco. Almost three years with no injuries or lameness to speak of.

He is now trying to make up for it.

I hopped on him on Thursday night. He was great at the mounting block and stood rock still after I got on. I savored that for a minute or so before asking him to walk. I knew immediately that he was going to be lame.

I couldn't really figure out where though. I walked him for a few minutes, then tried a trot before a friend left the arena. I started on the right rein down the long side, he definitely didn't feel right, but by the time we came out of the second corner I thought he didn't feel too bad.

Then I went left.

Oh yeah. He was lame.

Not really anything shouted out at us though. I definitely think its the left front/right hind diagonal pair, but my friend saw left front, I felt right hind. There wasn't a significant head bob, so I'm sticking with my hind thought.

I walked him under saddle for about 20 minutes with some leg yielding to see if he loosened up then tried another quick trot to the left. It actually felt pretty good. I just did one short end and hopped off and took him back to the barn. I tried some carrot stretches with him to see if that also helped. It may have all been too much as he seemed worse after standing when I led him back outside.

My plan was to hand walk him for the next few days. It's expected to get a bit chilly later this week again for about 4 days, so I thought I would wait until after the cold to try to hop on him again. I didn't go out to the barn Friday (work) or Saturday (abdominal pain on my drive home).

On Sunday I grabbed him from the field, took his blanket off and we went over to the arena for his walk. And I saw this. 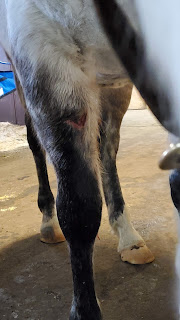 Big fat upper leg, with a lovely gouge out of it. 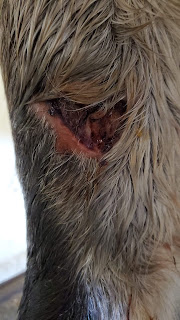 And yay! (sarcasm font) The gouge is a puncture wound. You can kind of see the hole on the top right. I grabbed a syringe with some betadine water and crossed my fingers that it would all squirt back at me, but nope, it all disappeared up into the hole.

Thankfully, Cisco is a far better patient than Phantom is. I'm pretty sure she would have attempted to kick me in the head a multitude of times. Cisco stood at the end of his lead rope and wasn't really happy with it, but his feet stayed firmly on the ground.

I didn't go crazy with flushing it out as the water wasn't draining - I don't know much it would be safe to use. The vet is coming out in the morning to look at another horse so I sent her an email and hoped that she will have time to look at him. I'm guessing he'll need some antibiotics, and I'd like to know just how deep it is if possible.

I guess I'll be doing daily visits for the next couple of weeks. Hopefully by the time the front leg heals whatever else he did manages to sort itself out. No point in a lameness check now because he only has two good legs at the moment - I don't know which leg is more sore at the moment.

I thought that the original lameness was related to having a new horse in his paddock and the hijinks that inevitably occur. I figure that he tweaked something.

When I saw the gouge, I thought that I was a terrible mother and missed it when I rode on Thursday and that was why he was lame. But I guess there were some more hijinks in the wee hours of Friday morning, and his turnout crew pushed a fence down, so it is likely related to that. His blanket covers it (and has a bunch of blood on it) so you wouldn't be able to see it without looking under the blanket.

I'll see what it looks like for the vet on Monday morning. I have a feeling it's going to be bigger - his leg wasn't full-on stovepipe when I left, but I'm not going to shocked if it is when I arrive in the morning.
at February 10, 2020